You are here: Home / Outdoor Report / The Catfish connection 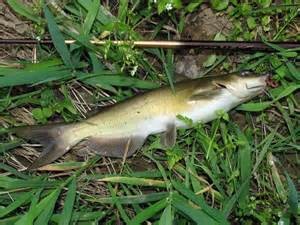 Freshwater fishing is up and down throughout Virginia with one exception – catfish. The whiskered bottom feeders are hitting cut bait, chicken livers and home concoctions across the sate. One hotspot has been, and continues to be, Lake Orange,

Darryl Kennedy at Angler’s Landing Marina at Lake Orange reports that the catfish action has been excellent all week following the Fourth of July. Fishing is good throughout the lake for anglers using chicken livers and live bait.

Lake Orange is a 124-acre lake owned and operated by the Department of Game and Inland Fisheries. As such, it is stocked annually with catchable size catfish, averaging 12-inches. But with a good forage base of shad, perch, minnows and other baitfish, the catfish grow quickly. There are some real bruisers in the lake. Lake Orange is also open 24-7, so a catfish angler can fish all night. Yet, the daylight hours also produce good catches, especially early morning.

Kennedy reports that walleye have really turned on in recent weeks with some good size fish coming to the scales. Bass are in a summer pattern, but are taking topwater lures early and again later in the day. Crappie have gone deep for the summer. Bluegills and redear sunfish have finished the spawn and have also moved to deeper water.

Currently, the water at Lake Orange is slightly stained with temperatures in the mid 80’s. Angler’s Landing rents boats and sells bait and snacks. To reserve a boat, or for more information, Call Darryl Kennedy at (540-672-3997),

The Potomac is clearing up nicely, but water levels remain higher. A good time to go full contact!

Early morning low tides are perfect for topwaters. Water is around 75 degrees. Cool and stormy on Monday, with overnight lows in the low 70s and highs in the mid to upper 80s the rest of the week. Chance of storms in the afternoon on Wednesday and Friday.

Hollow frogs, buzzbaits and Lucky Craft G-Splash poppers worked over grass, wood and docks should produce in low light. Under cloudy skies, also use 1/4-ounce Mann’s Classic Spinnerbaits around shallow cover. As the tides rise, use the spinnerbaits when there is chop or cloud cover. Try the larger, 3/8-ounce size to reach grass. Gold blades with white skirts are best. For frogs and buzzbaits, use 60 pound test GAMMA Torque braid.  Use 12-pound Copoly for the popper.

After tides rise and sun is up, go to a chattering jig or a swim jig. Craw skirts on both. For bladed jigs, use a Sharpie to paint the blades black. Lift and drop or slowly swim to get the mood of the fish. With high sun, go to the bottom with stickworms on 3/0 Mustad Ultra Point Mega Bite hooks, weightless. Mizmo tubes on the same hook with a 3/16-ounce weight. Pitch to grass edges or clumps and target docks. GAMMA 14-pound test Edge fluorocarbon line allows baits to sink faster and can horse fish out of grass.   Shaky head green pumpkin worms on 1/8 ounce Mizmo BarbWire heads with 8-10 pound Edge or Edge with 15-pound test GAMMA Torque Braid.

Larry Wollersheim and Preston Cox had an impressive catch for the recent Tuesday Night Tournament out of Anna Point, weighing a 5-fish limit at 17.38 pounds. Their big bass weighed 4.73. Guide Shawn Blankenship has been putting clients on lots of stripers including a limit catch of 12 for a party of three. P.J. Cox weighed a handsome 6.3 bass at Anna Point. Catfishing is very good and if you want to catch a big carp, now is the time, Some anglers are using fly rods to battle big carp up to 20 pounds.

The James has been up and down throughout the spring and early summer. Just as the water clears and fishing picks up, a gulley washer muddies the water, raises levels and disrupts fishing plans. When the water is clear, smallmouth are coming to the top, looking for damselflies. Muskie action has been good, but warming temperatures will likely slow that bite.

I am Jim Brewer, Editor of the new CvilleBuzz, a humble on-line attempt to entertain those, not only … END_OF_DOCUMENT_TOKEN_TO_BE_REPLACED