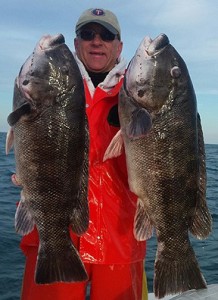 In Virginia saltwater, tautog are the main target. Some nice catches are being made on the coastal wrecks. The water is still warm enough that even the inshore wrecks are still holding a lot of sea bass that you have to weed through to get to the tautog. The coastal striped bass fishery has not developed. There is some catch-and-release action inside of the bay. Offshore bottom fishing is plagued by an abundance of spiny dogfish, but anglers willing to put up with them are catching some impressive blueline and golden tilefish. A couple of boats have tried dropping even deeper to try for swordfish with good success. There were several nice, daytime swordfish caught near the Norfolk Canyon last week.

Nothing in the surf. Tuna catches have been good out of the Outer Banks on the few occasions when boats can get out. The winds are NE at 6 and the water is currently 45 degrees

On Thursday, the sun was shining, the weather warm, and the bite was on. Good reports from behind the motels up to Ramp 44 and points in between. Upper slot Red Drum, Black Drum, Sea Mullet, Blue Fish, and Toads were beached. Shrimp is the bait of choice.

Large minnows fished on the bottom of the river channel in the bends are producing good numbers of large channel and blue catfish. Walleye are also hitting large minnows and brightly colored jigs. Largemouth bass and crappie action is excellent in the barge pits. Trophy smallmouth bass are holding in the deeper holes above Bosher’s Dam and around Columbia.

Yellow perch and crappie are hitting small jigs and medium minnows throughout the river. Some nice bass can be caught on jig ‘n pig, slow-rolled spinnerbaits and small plastic grubs at the mouths of the main feeder creeks on the outgoing tides. Catfish are aggressively taking cut bait.

Bass fishing is fair, with small fish being taken on jig ‘n pig and crankbaits in 6-12 feet of water, on points. The larger fish are halfway back in the coves, feeding in late afternoon and evening. Crappie fishing is good, with the fish being taken from brush piles and bridge pilings in 12-15 feet of water. Some stripers are being caught, mainly on old river channel bends and in Rudd’s Creek.

Bass and striper fishing is fair with some bass being caught off points on jig ‘n pig and live minnows in 7-12 feet of water. Striper fishing is also fair, with some medium sized fish being taken in the Blackwater arm of the lake. Crappie anglers are using live minnows and tiny jigs and are catching fish around brush piles and boat docks.

Yellow perch have started their trek up the river and should be around the Fredericksburg area within a week. A few white perch have appeared around Port Royal, moving North. Blue catfish are feeding heavily in the deeper holes in the river, primarily on cut shad or live white perch.

Catfishing is good with 12-16 pound fish being taken on nightcrawlers in 2-6 feet of water in the South Fork. Smallmouth bass action is very slow.

Bass fishing is fair to good, with fish in the 3-7 pound range taking jig ‘n pig and live minnows in 5-10 feet of water. The larger fish are near the dam and in the upper end of the lake. Striper action has slowed, but some are still being caught downstream of Sturgeon Creek, on Hopkins spoons and bucktails, and around Dike 3 on Cordell Redfins. Crappie and yellow perch may be found around the fish structures and in the creek channels.

Capt. Art Conway reported that Chickahominy Lake mid-day water temperatures were in the low 40’s in the lower lake and in the high 30’s in the upper lake.

I am Jim Brewer, Editor of the new CvilleBuzz, a humble on-line attempt to entertain those, not only … END_OF_DOCUMENT_TOKEN_TO_BE_REPLACED