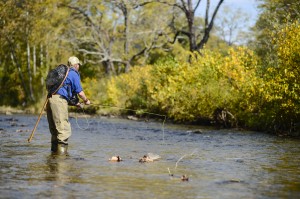 Here it is, almost August, and trout fishing is holding up despite the recent heat wave. Virginia has been blessed with regular rainfalls and cooling-off periods throughout the summer. Harry Murray of Murray’s Fly Shop reported that the stocked and delayed harvest streams on the western side of the Blue Ridge are in decent shape, with normal levels and temperatures running around 68. The brookie streams are running about 63 degrees, and that results in aggressive and feeding fish. A careful approach to a nice pool will generally result in strikes. Good flies, Murray states, are the Mr. Rapidan Parachute dry fly, size 16 and Murray’s Flying Beetle in size 16. Spring creeks, such as Mossy Creek and the upper South River near Waynesboro are fishing well for anglers using terrestrial patterns.

Tom Reisdorf of Angler’s Lane in Forest notes that the lower Jackson is giving up lots of nice rainbows and browns. They are going for Green Monsters and Prince Nymphs. The water is slowly but steadily rising. It is clear and warming. Brookie streams in the Lynchburg area are in the low 60s, a little low and clear. Caddis imitators are top producers, says Angler’s Lane.

Low light and low morning tides are perfect for top water frogs, toads and modified buzzbaits. The water temperature is sliding up into the mid 80s.

The key for all top water will be using weedless lures and braided line. For casting gear, 65-pound test GAMMA Torque will cast a long way and be strong enough to pull bass out of grass and the low stretch enables solid hook-sets. For spinning gear, try 30-pound test. For baits, use Mann’s hollow Goliath Frogs, HardNose Toads or the Frankentoad, and buzzbaits. Open the frog hooks a bit for better hook-sets. Use black in slightly stained water and white at other times. Try 1/8-ounce Mustad Swimbait hooks for toads, 3/0-7/0 depending on the size of the toad. Remove skirts from 1/4-ounce size buzzbaits. Thread a soft plastic toad to the buzzbaits. Toad colors black, green pumpkin or white.

As tides rise, go to Mann’s Baby 1-Minus in shad patterns for clear water or fire tiger for a slight stain. Also try swim jigs and chatter jigs. As the tide rises a bit more, go to a Lucky Craft BDS 4 crank bait. Crank this bait with the rod tip up to contact grass. Hesitate, and then make a short snaps upward to trigger strikes. Use 12-14 pound test GAMMA Edge fluorocarbon line.

With a high tide and full sun, docks come into play. Try 1/4 ounce

The snakehead bite on the Occoquan River is finally beginning to slow down. The bass are still taking spinnerbaits and crankbaits readily, especially on the rising tide.

Harry Murray, of Murray’s Fly Shop, says that the smallmouth bite is good in both the north and south forks of the Shenandoah. The best stretch of the north fork is from Mt. Jackson to Staunberg. On the South Fork, try Luray to Bentonville.  The water is at a normal level, 79 degrees and the clarity is perfect.

Doug Reynolds notes that fishing on the middle James has been “normal” over the past couple of weeks. Many smallmouth are being caught, just very few large ones in this heat. Most fish are in the 10- to 14-inch range with a few 15- to 17-inchers coming to net. Soft plastics have been performing as well as worms, craws, spider grubs and tubes. Black, brown, green and pumpkin have been among the best performing colors. Top water baits are still a great choice for early, late and low light conditions. Current conditions at Cartersville are, Flow 2950, Gauge 2.03, Water Temp 89, Turbidity 0.9.

Guide L.E. Rhodes, www.hatchmatcherguideservice.com, says the river is finally in great shape after having a big bump in levels this past week. Fly anglers are having success with blockhead poppers in yellow, black and chartreuse, Boggle Bugs are also effective and deer hair bugs have brought quality fish to the net. Crayfish patterns against clay banks produce as well. Gear fishermen should go with Tiny Torps, Pop R’s Skitter Pops and Cripple Killers for top water action. Soft plastics are still go-to baits for sub-surface action.

Capt. Art Conway of Conway’s River Rat Guide Service out of Ed Allen’s Boats and Bait reported that Chickahominy Lake mid-day water temperatures were in the mid to high 80’s in the main lake this Wednesday. The lake level was a few inches above the top of the dam. The water was moderately brown and slightly cloudy in the lower lake.

Bass’n is good at first light on shallow points. Deep-water tactics continue to produce stripers in the 10 to 12 pound range. Catfish are biting throughout the lake, with the best action upriver.

Tom Reisdorf at Angler’s Lane says the smallmouth streams are at stable levels, warming and clear. The fish are attacking baitfish imitators and popping bugs.

Holly Grove Marina reports that the largemouth night bite is good on buzzbaits and top waters. During the day, go deep with a Carolina Rigged lizard. Crappie can be found at 10 to 15 feet depths. Try a small minnow or a jig. Cats are in the edges of the river channel in 5 to 10 feet of water. Target them with cut bait, chicken livers or clam snouts on a bobber. Bream are in the shallows and are taking red wigglers and popping bugs.

John Zienius says that while smallmouth are coming in, they are all small. Try tubes, small cranks and spinners. Muskies are “on fire” and have “taken over the river”. Muskie hunters are almost guaranteed to land several of the toothy monsters. They are hitting just about everything, and are really hot for bass lures. The water is very clear, at a normal level and in the high 70s to low 80s.

The Striper Bite at Buggs

I am Jim Brewer, Editor of the new CvilleBuzz, a humble on-line attempt to entertain those, not only … END_OF_DOCUMENT_TOKEN_TO_BE_REPLACED