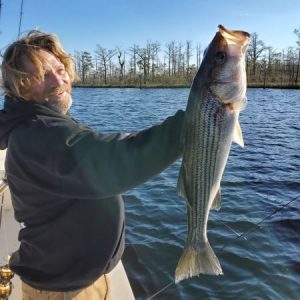 It’s now the Spring Striper Season in Virginia’s saltwater. There are lots of fish out there and they are biting. Rig up the rods, it’s time to go.

Stripers are now available in most Chesapeake Bay tributaries. The Bay’s Spring Striper season runs from May 16 through June 15. The minimum creel size limit is 20 inches, and the maximum size limit is 28 inches. The possession limit is 1 per person. Long Bay Pointe Bait and Tackle reported stripers and bluefish up in Long Creek. Connie Barbour says some of the bluefish caught near the Lesner bridge measured up to 30 inches.

Big red and black drum are available in their usual locations. For the next several weeks the lower Chesapeake Bay will be home to some of the best big drum fishing found anywhere in the world. Look for red drum to be on the shoals and breakwaters surrounding the southern tip of the Eastern Shore. Look for them near the islands of the CBBT. Night fishing has been excellent, but now anglers are starting to see reds on the surface and are sight casting to them during daylight. The best black drum location is along the shallow channel ledge running from Fisherman’s Island to near Kiptopeake, the Cabbage Patch and the Concrete Ships.

Captain Todd Beck from  says the trout bite in local inlets has slowed. The water temp along the oceanfront was 65 degrees on Saturday, but as soon as it hits 70, the bluefish and Spanish macs will really turn on.  Captain Nolan Agner of Aquaman Charters said his crew caught some big red drum along the oceanfront and their first few blues and Spanish of the season. Last summer’s Spanish mackerel fishing was outstanding. The fish were large, and hopefully we’ll see another great season this year.

The Rudee Head Boats caught croaker, speckled sea trout, spotted hake, roundhead and bluefish this past weekend. A couple boats out of Rudee Inlet made the very long run down to the Point off Oregon Inlet, and were rewarded with some nice yellowfin tuna.

Cobia season in Virginia opens June 1 and a few fish have already been caught and released in Virginia waters. This past weekend large schools were found just outside Oregon Inlet. Anglers were catching them from the inlet to Jennette’s pier. Many of these fish will enter the Bay in the coming days.

Some quality sized Tautogs to 10 to 12 pounds were caught before the season closed.

Inshore on the Peninsula side anglers have been finding specks and pups in the flats. Anglers reported some decent spot. Some black drum have been landed on the James River fishing pier.

Some great cobia fishing took place over the weekend near Oregon inlet. Anglers were finding schools of two dozen or more swimming together. A few cobia were landed in the surf as well.

Stan Cobb at Greentop says the hotspots for bass these days are on the tidal rivers – the James, Chickahominy, and Rappahannock. Many locals are claiming that many tidal bass have yet to spawn. This will definitely be a late spawn season.

Many are still reporting catching fish on spinnerbaits, swimsuits and Senkos.  A lot of snakeheads are being caught from the Potomac, and even some from the Rappahannock.

Sizable blue cats are being pulled in from the tidal rivers. The Rapp has been producing more numbers but the James has the larger sizes.

Excellent catches of stripers are coming from Lake Anna. Live bait presentations and topwater baits are working well. Great catches of bass, too. A bag weighing  22+ lbs. was the winning weight over the weekend.

Post spawn patterns seem to be working best. Look for the topwater bite to take off soon for bass. The Kerr Lake elevation is 301′, which is a slight rise in the last week.

Crappie are returning to mid-depth brush piles, with the larger creeks like Butchers, Grassy, and Eastland producing good catches. The better striper fishing is still coming from the upper portions of the lake.

This is the time of year when the crappie can be seen feeding on the insect hatches. The smaller bodies of water are better, as the fish roam and chase the food. Small jigs reeled slowly just beneath the surface, work well. This is also the time for the bigger bluegills to be caught.

A large bluegill is a challenging opponent on light tackle. Live bait, such as crickets, and night crawlers will usually find them quickly.

The upper James is on the rise again, so keep an eye on the river levels if considering chasing the Smallmouth this weekend. The current level is 7.54′ at the Westham gauge.

“I’m still seeing bass and crappie in full spawning mode,” he said. “ The  bluegills are just starting to spawn. Some nice walleyes have been caught us with live bait. Catfishing has picked up as well for anglers using chicken liver and large minnows.”

I am Jim Brewer, Editor of the new CvilleBuzz, a humble on-line attempt to entertain those, not only … END_OF_DOCUMENT_TOKEN_TO_BE_REPLACED