You are here: Home / Outdoor Report / Striper Season Winding Down 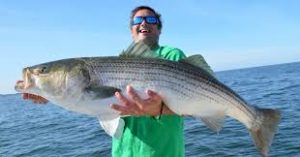 Just a couple more weeks remaining in the Virginia Stripwer Season within the Bay and its tributaries, but now is THE time to catch the big boys.

Stan Cobb of Greentop reports that bigger rockfish are being caught in many places right now. The Plantation Light area has been outstanding. Live eels have been the ticket for the bigger fish, which is common for this time of year. Inside the Rapp has been good, just not the reports of 50-inch fish, like there have been from the bay proper. Many inside the river continue to troll with good success. Stretch 25’s and tandem rigs are common baits right now. Some are jigging with good success. The 2 to 3 oz. jig heads with 6″ sea shads or plastic eels work well. The larger 10″ eels on jigs are also working. The tautog bite continues to thrive, both at the bay bridge tunnel, and on ocean wrecks, and structures. Speckled trout reports have slowed, but some specks are being caught by the die-hard anglers. Mirr-o-lures are the best bet right now, with suspending jerkbaits the second choice.

Several boats sailed from Oregon Inlet Marina on the 16th and caught a mix of yellowfin and blackfin. Not much happening in the surf, though there were sharks caught up and down the beaches and some Puppy Drum reported at the Jetties.
There have been a couple of good drum bites reported from the sound and some nice trout caught. The water temperature in the surf is 53 degrees.

A nice catch of 19 lbs. won the most recent winter tournament on the tidal James River, reports stan Cobb at Greentop. Jigs, jerkbaits, swimbaits, and metal blade baits are the best bets for the James and Chickahominy rivers. Lipless crankbaits are better on the Chick, than on the James. Alabama rigs are also taking fish on these rivers. Both the pits, and main river areas of the James, are holding bass. Some big crappie are coming from the James. Many forget how good the James can be for big crappie, as the Chick gets a lot of the attention for the specks. Big crappie are being caught from Anna as well. Many fish over a pound and a half been weighed recently. A limit of bass weighing 20.97 lbs. won the most recent winter tournament out of Sturgeon Creek Marina. Hendrix and Brewer were the winning team. The upper James rose to a level of 7′ at the Westham gauge on Tuesday, the 17th. The level should be fishable by the weekend if more precipitation does not occur.

I am Jim Brewer, Editor of the new CvilleBuzz, a humble on-line attempt to entertain those, not only … END_OF_DOCUMENT_TOKEN_TO_BE_REPLACED