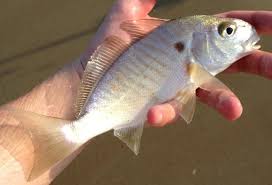 Good catches of spot continue to come from inside the Rappahannock. This is taking place much earlier than usual. Often, it’s September before the spot turn on. As usual, bloodworms are the ticket. Whiting are also moving up into the bay waters, concentrated especially at the mouth of the Rappahannock. White perch are there as well.

Stan Cobb of Greentop notes that the first catches of cobia have been reported from inside the Chesapeake Bay. The season starts Monday, June 1. Usually, the better catches of cobia come from chumming. Lots of chum increases the odds for hookups. Live eels work well on set lines while chumming.

The Memorial weekend saw a surge of black drum catches, but the catches of red drum were even greater. Many are having better success for the reds at night with crab as bait.

Rockfish are being caught inside the rivers, especially at creek mouths. Casting crank baits, swimsuits and topwater  are the most productive tactics.

Flounder reports slowed a bit this week, probably due to the overcast conditions and rain over the last week, but catches should bounce back with the sunny, warm weather and the approach of June.

The speckled trout action is red hot in the Nags Head/Hatteras area. Good reports have been coming from inside the sounds and at the little bridge in Manteo. Inshore anglers are finding Spanish mackerel and puppy drum along with then specks.

Stan Cobb reports that most of our rivers are still muddy, even the Chickahominy River. The lakes and ponds saw more action over the weekend due to the high levels of the rivers.

Kerr Lake is expected to top out at 314.2′ on Wednesday this week. Finding a launch site can be a challenge at this level. The lower sections of Kerr are safer and cleaner options at this time and lake elevation.

Lake Gaston maintains a tighter variance on the water levels due to the amount of waterfront properties and dwellings. This may be an option for a bit more stable conditions.

Lake Anna has a very small watershed. So, it remains relatively clear compared to other bodies of water in the area. Stripers are being caught there in high numbers, especially for those using live bait. Those chasing stripers are also finding some nice bass.

I am Jim Brewer, Editor of the new CvilleBuzz, a humble on-line attempt to entertain those, not only … END_OF_DOCUMENT_TOKEN_TO_BE_REPLACED