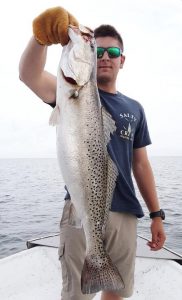 What a comeback. Three years ago, speckled trout were on the ropes, especially in Virginia, after a brutally cold winter. Last year, speck fishing was very good and this year appears even better, especially on the Outer Banks.

Capt. Reese Stecher is once again guiding parties back in the Roanoke Sound and is catching some huge stripers (see above), plus puppy drum and…. the cobia fishing has been on fire. With the beaches now opening to tourists, this is the time to head for Nags Head. Contact Capt. Stecher at catchem@beachbumfishing.com

In Virginia, it’s cobia, cobia and more cobia! The season opened Monday and the cobia were ready. Fish to 80 pounds have come to scales. Some boats are chumming, some sight casting. Live eels are almost a sure thing when casting for cobia.

Red drum are still prowling the shoals and speckled trout fishing is heating up in our Commonwealth waters.

The mouth of the Rappahannock is producing Spanish Mackerel catches already. Spot, too, are biting earlier than usual.

Limits of flounder are on the rise in the Chincoteague and Wachapreague areas with minnow/squid combos behind flounder rigs working best.

There have also been some early bites for spadefish. The first big spades typically come from the Chesapeake Light Tower.

Stan Cobb at Greentop reports that the tidal Rappahannock has been producing excellent catches of bass, yellow perch, white perch, and some sizable snakeheads. The snakeheads have become quite popular for anglers fishing both the Potomac and Rappahannock rivers.

The James and Chickahominy rivers have also been outstanding for largemouth, last month in particular. Topwater baits, Senkos and creature baits  have been best. The upper James is returning to normal, and early June is when we see a rise in big fish, after the rigors of the spawn. This can be a fantastic time for topwater baits.   When the level at the Westham gauge drops below 6 feet, the water-color becomes more desirable.

Stripers in Lake Anna continue to bite well, particularly for those using live bait. The mid lake area seems to be the most productive. The bass are bouncing back after the spawn. Eighteen pounds won a tournament over the weekend.

Kerr Lake is at 313′. There haven’t been many reports due to the closing of most ramps for high water. Checking water levels and accessible ramps before heading to Kerr is advised. Gaston is a good alternative as good-sized spotted bass are being caught throughout the lake.

Smith Mountain Lake is producing good sized stripers from the dam area. Live bait is tops there also. The striper guys are reporting nice catches of smallmouth and largemouth at the same depths and in the same areas as the stripers.

Topwater action is good on local ponds for bass. Bluegills can still be found in the shallows spawning and crappie can be caught roaming throughout the open water areas. Two-inch grubs are a favorite for both crappie and sunfish.

No Bluegill Left Behind

I am Jim Brewer, Editor of the new CvilleBuzz, a humble on-line attempt to entertain those, not only … END_OF_DOCUMENT_TOKEN_TO_BE_REPLACED