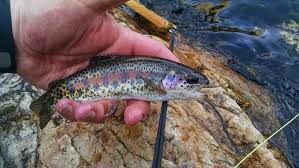 It’s still winter, but the trout are biting on the South River in Waynesboro. According to Tommy Lawhorne at South River Fly Shop, recent rains have brought the South back to normal levels with lots of nice Rainbows and Browns being caught. Midges are hatching daily and the Early Smoky Sedge Caddis hatch will be starting soon. Rubberlegs Stoneflies, Frenchies, JW Jig Leech, Cinnamon Poo-pah, Amber Arlie’s Gnarlie Caddis and small streamers have all been working.

Tommy says there have been two stockings downtown by VDGIF in October and again in January. In addition, there were two private stockings in September and November. Additional stocking was also done in early December in the Fly Fishing Only Area.

“We will have one more privately funded stocking downtown before the Expo,” Tommy remarked. “With the Catch and Release regulations there are now lots more holdovers and even quite a few stream-bred Rainbows in the river, which makes frequent stockings much less important.”

Tommy noted that they had electro-surveyed about 20 little rainbows up to 9″ range back in September- at least three year classes.

Tommy said that the South River has many of the same characteristics as the famous Yellow Breeches in Pennsylvania.

“Lots of bugs, great limestone springs, abundant forage and the new protective regulations are finally turning this river into the gem that we knew it could be!” he said.

tommy@southriverflyshop.com or call the shop at

Things slowed throughout the state last week with a bitter cold snap.

On the Potomac, Capt. Chaconas noted that the cold weather has dropped water temperatures into the upper 30s. Days are getting longer, however and it won’t be long.

Steve says: Take note that boat ramps will be icy when you start. Go later when it warms up. Too cold for fast moving lures. Silver Buddy blade baits are the best choice for covering water, fished slowly and deliberately. Location is key. Choose out of the current bays with steep drops. It’s best to work these spots parallel to keep the Silver Buddy in the strike zone.

Cast to about 3 feet deep. Work the bait out to deeper water, keeping the boat in about 10 feet. Position the boat to make casts that cover various depths. Take note of the depth fish are caught or seen on depth finders. After the bait hits the bottom, a gentle burp of the Silver Buddy creates a very tight vibration and fish will usually hit on the drop. Allow the bait to slowly drop on semi slack line. Once on the bottom, gently burp again. Lift the rod tip about 3-4 inches. but do not overwork. I prefer bait-casting gear like the Quantum Vapor. It’s fast and can cast 10-pound Edge fluorocarbon line easily. For rods, a 7 footer, medium action graphite rod is good for hooksets and to maintain enough pressure on hooks to land fish and not pull hooks out.

I am Jim Brewer, Editor of the new CvilleBuzz, a humble on-line attempt to entertain those, not only … END_OF_DOCUMENT_TOKEN_TO_BE_REPLACED