You are here: Home / Outdoor Report / Shad Run Winding Down 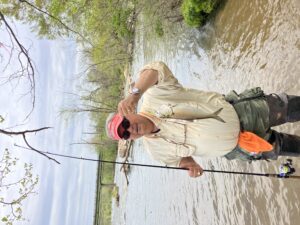 Mark Scott, a former Virginian who abandoned Jefferson Country to settle in on the southern beaches of North Carolina, made a return visit to our Commonwealth and caught some nice shad at Fredericksburg. Mark and Dan Beisner caught about 15 hickory shad between them. The shad run typically begins with the first dogwood bloom, so it’s about over for this year.

At Buggs Island Lake, the shad spawn is underway, and bass and catfish are hard on their heels – fishing is very good. Bass fishing is very good on the tidal rivers, but the smallmouth bite ended with floods of muddy water. Hopefully, the levels return to normal so young bass can hatch.

Crappie in most lakes are now moving from shallow water to deeper brush. At Lake Orange, bass and crappie are in all phases of the spawn. Bream and red eared sunfish are spawning being and eating red wigglers. Catfishing is strong throughout the lake. A few nice walleye have been caught on rocky points by anglers using harness rigs with nightcrawlers.

Capt. Reese Stecher is having a hard time deciding where to fish out of  Oregon Inlet.  The puppy drum are hammering baits in the sound and cobia are patrolling the waters just outside Oregon Inlet. Maybe both? Book a trip now at beachbumfiishing.com.

Stan Cobb at Greentop says that anglers from Nags Head to Buxton are enjoying good surf action for the pups and specks.  Catches are coming from both the seaside and the sound side. Bluefish are also being biting. The piers are producing lots of sea mullet, with occasional catches of trout. Offshore boats are scoring with blackfin tuna, yellow fin tuna, Wahoo, and increased catches of Mahi. Some sailfish are also being caught.

Black drum fishing is outstanding now on the southern end of Virginia’s Eastern Shore. Clam baits are best. Big red drum are beginning to school and cruise. Sheepshead have moved in. Seabass season is in again but tautog season has closed through June 30. It’s hard to keep track.

Virginia rockfish season is now open through 6/15/22. There is a 20-inch minimum, and a 28-inch maximum size limit with one fish per day per angler. The Piankatank river is good as is the structure off the CBBT.

I am Jim Brewer, Editor of the new CvilleBuzz, a humble on-line attempt to entertain those, not only … END_OF_DOCUMENT_TOKEN_TO_BE_REPLACED