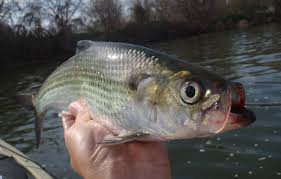 Anglers tossing shad darts continue to catch lots of nice Hickory Shad on the Rappahannock. Mark Scott and Dan Beisner fished the Rappahannock last Sunday at Fredericksburg. They fished both above and below the bridge, fishing one hour before high tide below the bridge, then moving above the bridge the rest of the time. The pair caught between 30-40 fish total -Beisner on the snag and release flyrod, and Mark with the spinning reel, using a variety of shad darts in several colors. Pink was the one color that did not catch a fish.

Both forks of the river are producing good numbers of smallmouth on small plastic worms and grubs. Larger fish are going for small, fat crankbaits in green or chartreuse colors. Flyrodders have success with olive, brown and black, weighted, wooly buggers.

Largemouth bass action is good for anglers fishing shallow points on the main lake or in the creeks. Topwater baits, early and late in the day, are producing good stringers. Concentrate in the shallow water uplake, but work the baits deeper as the sun goes higher. Striper action is good, with most of the fish being taken on Sassy Shads, Hopkins Spoons and live shad. Crappie are biting well. Best areas are around the bridge pilings and beaver lodges.

Conditions are now ideal for smallmouth action from Lynchburg down to Scottsville. The water is in near perfect shape. Above Richmond, smallmouth bass are taking plastics, topwater lures and live baits. In the lower tidal sections, largemouth bass are orienting to creek mouths, coves and standing cypress. Shallow water and moving tides are the key to taking these fish. Blue catfish are biting well in the deeper channels well below the city. White perch are still available below the Dutch Gap Power Plant.

Lots of gar are being taken on live minnows around the dam. Largemouth bass, orienting to the lily pads, may be taken on buzzbaits, spinnerbaits and plastic worms. Catfish and bream round out the action.

Topwater baits are taking bass early and late in the day. The bass are active in shallow water on main lake points. Midlake, fish are in the shallow, back ends of the coves. Striper action is good around the I-85 and Route 1 Bridges. Crappie are biting well. Bream are biting crickets.

The most consistent pattern for bass this past week was Zoom Centipedes in pumpkinseed or watermelon seed, light sinkers, light line, fished on rocky bluffs. Lots of large crappie are taking slow-rolled spinnerbaits or jerk baits adjacent to the buck brush. Crappie may also be found on bridge pilings and catfish are biting everything in sight. Cut shad or chicken livers in shallow water are the ticket for the cats. Striper fishing at the base of Kerr Dam is excellent. Fish to 18 pounds are not unusual.

Baitfish are moving onto the banks at night – the best time for striper fishing. Live shad are the best bait for the big fish, but Cordell Redfins and bucktails are also working. Largemouth bass are hitting plastic worms and lizards in the Roanoke River arm of the lake. Plenty of large crappie are also available at Smith Mountain.

Bass action is excellent in 3-4 feet of water on both live bait and crankbait offerings. Brown trout are being caught, by trolling or fishing live alewives, in deep water at night. Crappie fishing is excellent, with good numbers of big fish being caught. Rainbow trout have moved in the area around Fourtney Boat Landing. The fish are in the 12-16 inch range.

The smallmouth bite is officially on with by-catches of muskies. The water is in great shape.

Capt. Chaconas says that Mother Nature put the brakes on spring. Cooler nights, wind and cold rain are keeping water temperatures from getting into spawning range. Bass need water temperatures holding in the 60s and around 65 for spawning to begin. With warm weather this week, that should kick things off.

Capt. Art Conway out of  Ed Allen’s Boats and Bait reported that Chickahominy Lake mid-day water temperatures were in the mid 70’s in the main lake and in the creeks on Wednesday. The lake level was about an inch above the top of the dam.

I am Jim Brewer, Editor of the new CvilleBuzz, a humble on-line attempt to entertain those, not only … END_OF_DOCUMENT_TOKEN_TO_BE_REPLACED