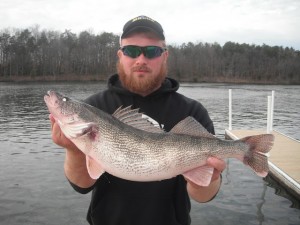 On March 12, Dyllon Kincer brought what looked to be a nice walleye to the Anna Point Marina scales. But it wasn’t a walleye. It was a saugeye.

A saugeye is a hatchery-produced hybrid – a cross between a female walleye and a male sauger, and they are well suited for reservoirs such as Anna.

Although saugeye are a cross between walleye and sauger, they often behave differently than walleye, so fishing methods can vary. Saugeye are not likely to suspend off the bottom, unlike walleye, so always present lures close to the bottom.

Saugeye are similar in appearance to both parental species. They are best identified by the “blotchy” saddle markings on their side and back, similar to sauger, but they usually have white pigment on the lower portion of their tail along with dark blotches on their dorsal fin membrane. Anna Point personnel said the distinctive black spots on the dorsal fin helped them identify the fish as a saugeye.

Lake Orange is another impoundment that has been stocked with saugeye. Since saugeye are hybrids, and sterile, they grow faster than their cousins, putting on weight and inches quicker. Lake Orange is hoping that some keeper size saugeye will be caught this spring and summer.

Some other nice fish are also coming to the scales at Anna.

What a difference a week makes! Potomac River temperatures are into the 50s! A huge jump from last week when it was in the low 40s. Open the tacklebox.

Fish will be moving from deep winter spots, so fish shallower and a bit more aggressively. Showers and 60s with Wednesday bring mostly sunny skies and 75 degrees! Slipping into the mid 60s into the weekend with more showers on Thursday. Overnight lows in the 50s.

Slow rolling Mann’s Classic spinnerbaits with willow/Colorado gold blades on 12-pound Edge is especially effective when the water is slightly stained and with cloud cover. Cast and allow the spinnerbait to hit bottom. Reel slowly; drag to stay in touch with the bottom.

At low tide during the warmer part of the day, look for wood cover in the same areas and crank Lucky Craft 1.5 cranks on 10-pound test Edge.

Capt. Art Conway out of Ed Allen’s Boats and Bait reported that Chickahominy Lake mid-day water temperatures were in the low to mid 60’s in the lower main lake and the high 60’s in the major creeks on Wednesday (3/16/2016). The lake level was a few inches above the top of the dam. The water was light brown and very slightly cloudy in the central lower lake.

Fishing with Capt. Conway, Capt. Bill Buck had 10 crappie including a 16-inch citation.

Front Royal Canoe is open for the season. Ed T., resident fishing guru, will be submitting new reports starting next week. Looks like it’s going to be a great year on the Shenandoah. Below is Ed’s last report from the fall.

Last trip of the year for me. FRO is closing shop next Sunday. Decided my last trip would be a short one. Weather forecast called for a good chance of rain after noon. The water level was still nice, I had no trouble getting through this section of the South Fork. Only problem was all the debris in the water, lots of dead leaves (it was Fall after all) and lots of dead grass. The cold water had killed a lot of the aquatic grass, so it ended up floating in the water. All that trash made it almost impossible to reel in a lure more than a foot or two before it was choked up. Between cold water and choked up lures I had a pretty hard time yesterday. Compounding the problem was the fact that soft plastics rarely work when the water gets that cold. End result? I just kept tossing a #3 Mepps spinner over and over and cleaning it off almost every cast. I caught two smallmouth yesterday, both twelve inch, both caught in shallow pools of slack water near the banks and between rock ledges. I think about the only thing that might have improved my chances was live bait like big shiners or better yet mad toms. Live bait works even in the dead of winter. The leaves were pretty and the air was reasonably warm. I did not get rained on. So even though the fishing was decidedly lackluster, I enjoyed my last trip on the river. It’s always nice to be on the Shenandoah, it’s a beautiful and peaceful place. I drove home with a nice used kayak I purchased from FRO, I plan on getting in some paddling this winter. FRO still has some nice used or new watercraft for sale if you are in the market. Anyway, that’s it for my reports this year. I hope you have enjoyed them. I’ll be back next April. Till then, good luck with your fishing.

The Invasion of Cobia

I am Jim Brewer, Editor of the new CvilleBuzz, a humble on-line attempt to entertain those, not only … END_OF_DOCUMENT_TOKEN_TO_BE_REPLACED