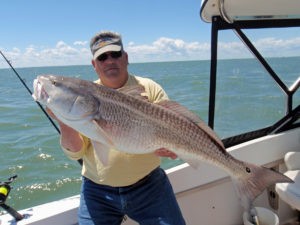 The best flounder fishing is taking place in our seaside inlets. The tautogs are being caught on structure, near shore and in the lower Chesapeake Bay.

Red drum are here and will be available throughout the lower bay for several weeks. Many anglers like to set up for them near the rock islands of the Chesapeake Bay Bridge Tunnel. Occasionally, they can be spotted swimming on the surface. They also love to feed on the shoals near the Eastern Shore.

Black drum anglers, don’t forget the Fourth Annual Black Drum Chase. It will be held May 11th-20th and you can sign up at Chris’ Bait and Tackle on the Eastern Shore.

The trophy striped bass season is open and fish over 40 pounds have been weighed. The first sheepshead are here and the cobia will be arriving soon. Cobia are already being caught off Hatteras NC. Remember the Virginia cobia season does not open until June 1. Don’t forget about the 2018 Cobia Bowl July 19th-21st. The Cobia bowl, now known as the Monarch Cobia Classic looks to be bigger and better than ever!

Offshore the tuna fishing remains very good to our south. A few Virginia Beach Charter Boats are now available for the long run to the tuna. Offshore bottom fishing for tilefish and grouper is very good. The Rudee Angler just returned from a great trip. The sea bass season will re-open again May 15 and the blueline tilefish season opened May 1.

Boats fishing along the beach near Oregon Inlet are catching albacore and lots of bluefish. The headboats are catching sea mullet and bluefish.

The OBX offshore fleet is enjoying fantastic tuna fishing, yellowfin, blackfin and bigeye are all available. So are the dolphin, with some being gaffers. A few wahoo and billfish round out the catch.

Out of Hatteras Harbor, inshore anglers had a good time Wednesday catching and releasing some big drum. The Bluefish bite was on as well. Several boats fished offshore despite rough conditions. Anglers returned with good catches of Blackfin and Yellowfin Tuna. Dolphin fishing was good as well. The Carolina Girl released a Sailfish.

Fish are in shallow water and in spawn mode. They can be caught up close with pitches and at long range with soft plastics.

Water has warmed to around 70.  Overnight water is cooling to the low to mid 60s. Sun and clouds and dry this week.

Take note of the conditions. Lower tides spinnerbaits and Mann’s Baby 1-Minus can bring fish over grass and wood cover. Use 12-pound test Gamma Edge fluorocarbon line for subsurface lures.

Cast Texas rigged Mizmo tubes with 3/0 MUSTAD Mega Bite hooks and 1/8-ounce bullet weights. Don’t peg to allow some separation for more action and to shake in one spot. Also use dark stick worms. The key is to feel for grass, shake and then let the bait drop next to grass clumps. These are spots fish are located. Move again to contact grass and lift up and gently shake to allow it to drop. These same baits work pitched as well. Look for spaces in grass clumps to target beds. Even if you can’t see them, they’re there, so focus and be patient. Repeated casts to circular holes surrounded by grass will be effective.

Contributed by Darrell Kennedy of Angler’s Landing at (540.672.3997) Water temperature is around 70 degrees and clear. Bass, crappie and blue gills are in all phases of the spawn.  Bass are being caught on topwater in lowlight periods and plastics.  During high light conditions, live bait will entice the bass bite. Crappie are hitting small minnows in 4 ft. to 8 ft. of water.  Bream are in 3 ft. of water or less with red wigglers being the bait of choice. Some nice walleye have been caught on nightcrawlers and minnows and a few on crankbaits – the upper end being best.

I am Jim Brewer, Editor of the new CvilleBuzz, a humble on-line attempt to entertain those, not only … END_OF_DOCUMENT_TOKEN_TO_BE_REPLACED