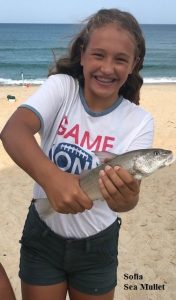 Chris Bait & Tackle at Kiptopeke notes that the cobia run is still strong from Buoy 16, 13 and 36. Anglers are having success with both live eels and bunker.

The red drum bite has also been great, especially the evening bite. Fresh bunker, again, is doing the trick.  At the Lattimer Shoals and the Middle Grounds, the flounder bite is improving with some fish weighing over 4 lbs.,

Spanish and blues are also abundant. Anglers are scoring by trolling and by casting to the blues. Spadefish mixed with a few sheepshead and triggers are around the CBBT and the 4th island.

Croakers and sea mullet are available in the bay, though there have not been numbers of fish caught. Angelin and Brent Ham have been fishing from Cape Charles to the High Rise with great success, catching flounder and lots of bottom fish.

Surf Fishing: TWs reports that there are sea mullet along all the beaches. The Avon area is producing sea robins, spot and small bluefish. Frisco anglers ate beaching pompano. The beaches from Kitty Hawk to north of the Bridge are producing nice size sea mullet along with croaker, spot and pompano in Nags Head.

Nags Head: A decent Spanish bite with a 5 ½ pounder, plus bluefish and sea mullet.

Offshore: Wednesday was an impressive day for the blue water Oregon Inlet fleet as they returned to the docks with good numbers of meat fish. There were Yellowfin, Blackfin and Mahi in the mix. Some 70 boats fished and it was quite a show with 60 billfish releases.

The winds at Nags Head are SW at 5 and the water temp is 76 degrees.

Wednesday was been a busy one for anglers. Inshore boats returned with good catches of bluefish and speckled trout in the morning. The afternoon parties enjoyed good drum fishing (some keepers and many over the slot). A couple of boats fished near shore and returned with king mackerel and Spanish mackerel. Offshore catches included dolphin, a few wahoo, and some blackfin tuna. Bottom fishing was good, as anglers brought in tilefish, grouper, triggerfish, amberjack and barracuda. James J. Weidman of Boyertown, PA landed a citation 70 lb. grouper aboard the Good Times.

I am Jim Brewer, Editor of the new CvilleBuzz, a humble on-line attempt to entertain those, not only … END_OF_DOCUMENT_TOKEN_TO_BE_REPLACED