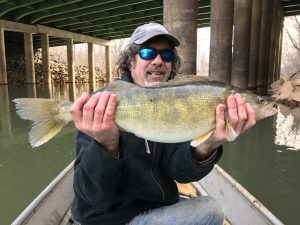 There have been walleye roaming the Rivanna River for years. As many as 20 years ago, the Game Department stocked walleye in the Rivanna Reservoir hoping that species would become established. They never really did. In fact, walleye have a tendency to go downstream and many of them went over the dam. There was once a pretty good fishery for walleyes below the dam as they tried to make their way back upstream. So walleye are in the Rivanna, but who knew that there were giant walleyes in the river?

Tom Walts, a Certified Master Angler according to the Game Department, landed – and released – this beauty. The fish, laden with eggs and obviously trying to spawn, stretched 27-inches. Tim’s brother caught a 24 ½ inch walleye just minutes later. Both fish are back in the river unharmed, and have likely spawned.

For Tim, this was his 10thcitation species, making him a Master Angler. Tim has caught giant flatheads in the James and huge yellow perch in Ragged Mountain Reservoir, so he knows how to catch trophy fish. He caught so many citations at Ragged Mountain, n fact, that the Game Department has pegged him as an Expert Perch Angler!

Tim releases every trophy fish he catches and encourages other anglers to do the same.

Walts has taken his walleye-catching prowess to Lake Orange in recent years where the fish seem to be doing well.

Walleye spawn in the early spring and now is the time to catch them. Try the Rivanna River and Lake Orange. You, too, may catch a giant.

Stan White at Greentop says that some large catches were made over the weekend, especially on the Chickahominy and James rivers. A 26 lb. bag of bass was the winning 5-fish limit from the CATT tournament out of Route 5. A huge 10.89-pounder was the big fish of the tournament. The shad run is increasing daily, and the James is clearing. Look for the shad bite to peak around the 10th of April. The white perch run is also underway. Many anglers are using bloodworms to attract the perch. The Rappahannock, Potomac and James are well known for their strong white perch runs.

A catch of 20-lbs. won a weekend tournament at Anna with 19 lbs. as a close second. Crankbaits, rattle traps, and spinnerbaits were the top baits. Crappie are moving shallow. Beaver huts, stumps, and submerged brush have been attracting the crappie. Shallow docks are also productive. Stripers are being caught at Anna, despite stained conditions in the upper lake. Kerr lake elevation is 303-feet. Bass anglers are reportedly catching fish back in the bushes. Both points and coves are holding bass.

Kerr Lake is the destination for giant crappie, and late March/early April is the time to succeed. Shallow stumps are often preferred by the bigger fish. The bass catches at Gaston slowed a bit over the weekend.

I am Jim Brewer, Editor of the new CvilleBuzz, a humble on-line attempt to entertain those, not only … END_OF_DOCUMENT_TOKEN_TO_BE_REPLACED