You are here: Home / Outdoor Report / Return of the Ribbonfish 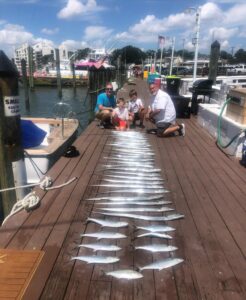 Capt. David of the High Hopes Charters took a father and two sons on a trip and caught some nice Spanish mackerel. They also caught some ribbonfish – lots of ribbonfish, about 30 in all.

After making occasional appearances, ribbonfish showed up in force last summer in Virginia waters. The ribbons are hitting spoons intended for Spanish mackerel. The ribbonfish schools hang near the bottom, but will feed up and strike viciously if a spoon wobbles above.

Previously considered almost a trash fish, used primarily as bait for king mackerel, someone discovered they were excellent table fare and considered a delicacy in parts of Asia. So if one latches on, put it on ice, filet the silvery fish and enjoy.

The best Spanish mackerel fishing of the season is now occurring along the oceanfront and in the lower bay. Trolling Clark and Drone spoons will do the trick, and those pulling larger spoons are catching plenty of ribbonfish.

Areas to the south of Virginia Beach are having an outstanding king mackerel season. They are catching lots of 40 pounders. Look for them to start showing up in area waters soon.

Cobia action remains excellent. Fish up to 80 lbs. have been landed this week. Sight casting is best right now. Shark releases are numerous for those chumming.

Spadefish are around buoys, pilings of the CBBT and the Chesapeake Light Tower.

Sheepsheads are hanging around structure. Big red drum scattered are throughout the lower Bay.

Flounder catches are also on the rise. Look for them along the CBBT, around inshore wrecks and artificial reefs throughout the lower bay and along the coast. Coastal wrecks are holding larger flounder and sea bass, bluefish, amberjacks and triggerfish.

On Tuesday of this week, TWs Tackle reported that the offshore boats brought  yellowfins, limits of Mahi Mahi and tilefish back to the docks. There were a few blue marlin releases as well. The nearshore boats had a great day with blues, Spanish, king mackerel, seabass and. amberjack.

It was a slow day for the piers, but there was a report of a throwback cobia. In the surf, there were also some nice sea mullet caught on sand fleas. There also some croaker, spot, blues and Spanish drug up on the beaches.

Stan Cobb of Greentop says that the tidal rivers are fishing well, particularly the Chickahominy River. Many are reporting a good grass frog bite throughout the river.

Some notable catches of bass have been coming from the Potomac River. The grass patterns are prevailing. The upper James is low and clear, which means low-light times are usually much more productive. Small top water baits, Flukes, and 4 to 5 inch grubs on 1/16 to 1/8 oz jig heads are working.

The 208 area of Anna has been popular lately for those targeting stripers. The better bass fishing has been taking place in the mid-to-upper sections of Anna.

Buggs Island crappie are being caught from brush topping out at 15′ to over 25′ of water. Brush in the main lake, and just inside some of the larger creeks, have been the best producers. There haven’t been many big fish caught like this, but the numbers have been plentiful. Many of the bass have been holding to the creek channel and river channel drops. The present lake elevation is 300.4 feet.

The Shenandoah River has been red hot for smallmouth fishing. Fly rodders are scoring with poppers and dragon fly patterns while spin fishermen are using small plugs, then switching to topwater lures.

I am Jim Brewer, Editor of the new CvilleBuzz, a humble on-line attempt to entertain those, not only … END_OF_DOCUMENT_TOKEN_TO_BE_REPLACED