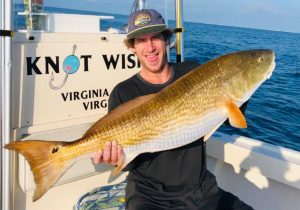 It may never stop. Catches of big red drum got off to a hot start in the Chesapeake Bay back in April and they show no sign of letting up. Large schools of huge drum continue to pop up and anglers with a rod ready are casting and hooking up with some big boys to 70 pounds. Both the larger red drum and the cobia are plentiful throughout the lower bay and along the coast. Anglers are catching them sight casting or by anchoring and chumming.

Sharks are also plentiful throughout the area and there are some nice kings and false albacore biting off the beaches, where boats are also finding plenty of bluefish, ribbonfish and large Spanish mackerel. The Spanish can be found along the oceanfront and in the Bay from the CBBT up to Mobjack Bay and the mouths of the Rappahannock and York Rivers. Both planers and in-line sinkers and Clark or Drone spoons are working.

Look for plenty of spadefish along the Chesapeake Bay Bridge-Tunnel and at navigational buoys in the bay and along the coast. Sheepshead are also along the CBBT span. Flounder catches are on the rise at the CBBT and around ocean structures. Some larger fish have been caught. August through September is the peak season for the flat fish.

Tarpon are in the backwater holes on the Eastern Shore barrier islands, especially around Oyster. Spot and croaker are available along bay beaches and tidal rivers. They are getting larger by the day. There have been some pretty nice sized spot caught.

Bluewater trollers are boating white marlin, blues, wahoo, dolphin and scattered tuna. The Rebel, out of Rudee Inlet, caught and released over two dozen white marlin and a blue one day last week. Captain David Wright, High Hopes Charters, has been mixing it up offshore. He’s been successfully trolling for marlin, sailfish and dolphin then changing up and deep dropping for tilefish.

The cape is reporting some Spanish and a few puppy drum. There were also some flounder catches reported. On the northern beaches, it has been sharks, sea mullet and spot.

The Little Bridge on the Nags Head/Manteo causeway reported trout, flounder pinfish and croaker. A family from Olney, Md. fished the Little Bridge and caught lots of bottom fish on shrimp. It was the first fish ever for several of the children.

More impressive catches of bass were made this week on the tidal James and Chickahominy rivers. Twenty-three pounds was the winning weight of the CATT trail over the weekend out of Osbourne Landing. Twenty-two pounds was second place, and 21 pounds was 3rd. These are indeed notable catches no matter the time of year, but particularly in mid-August during heavy downpours.

The Chickahominy river and lake seldom get muddy, even during repeated and heavy rains. The James is still a little high, but should be in great shape for the weekend. The upper James should be in fine shape as well. With the elevated water levels, there haven’t been many reports from the upper James smallmouth anglers.

Winning weights on the Potomac are still in the 14 pound range, which we’ve been seeing for most of the year. Most of the aquatic grass present on the Potomac is hydrilla. The preferred grass for many is the milfoil grass, which is not as prevalent, but there is some to be found. One of the top lures in that area this year has been the Senko.

Kerr Lake elevation is 301 feet. The lake seems to be dropping slightly now. Bass and crappie both are being found around brush piles. Many of the more productive brush piles have been in 12 to 20 feet of water. This has also been the case at Lake Anna. The bridge areas seem to be more popular for crappie at Anna. Slip floats with small minnows are usually best. Stripers continue to bite well in the early morning hours at Anna with live bait the most productive. Precise presentations with weighted down lines have been best.

The cool rains pushed many fish shallower for a short time, especially in local ponds. When this is the case, buzz baits can be deadly for bass. Weedless grass frogs are also productive during this time.

Winter on the Chick

I am Jim Brewer, Editor of the new CvilleBuzz, a humble on-line attempt to entertain those, not only … END_OF_DOCUMENT_TOKEN_TO_BE_REPLACED