You are here: Home / Outdoor Report / New Regs for the South River 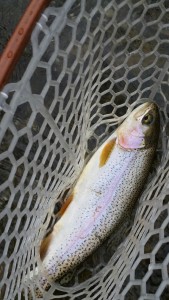 Kevin Little, co-owner at South River Fly Shop in Waynesboro, reported that both proposed regulation amendments for the South River passed. As of January 1, 2017, the downtown section will become a year-round Catch and Release, Artificial Only Fishery. The upper South River Special Reg Area will become Fly Fishing Only with a limit of one trout over 20-inches, the same regulations as Mossy Creek.

This has been a four-year process involving the efforts of the Shenandoah Valley Chapter of Trout Unlimited, the South River Fly Shop, Virginia DGIF Region 4 Fisheries and local anglers. Also, SVTU is currently working on plans for habitat restoration on the SRA, so we will be able to carry even more trout per mile. Both the shop and SVTU still plan on continuing the privately funded supplemental big trout stockings on both sections.

Anglers Lane in Lynchburg notes that rainbows and browns in the Jackson River are biting nymphs and grasshopper imitations. The water is very clear, in the high 50s and at a normal level for this time of year. The mountain brookie streams are too low for good fishing.

Murray’s Fly Shop notes that the stocked and delayed harvest streams in the Valley are productive. Harry says the best areas are below the riffles and where springs feed into the streams.

At Angler’s Lane, Tom Reisdorf says smallmouth fishing in the James is good. Fish are going for top water offerings and minnow imitations. The water is clear, low and warm.

Holly Grove Marina says largemouth action is good in the deeper waters. Early fishing is still the best bet. In shallower waters, it’s poppers and top water baits. Deeper down, try Carolina Rigs and suspended jerkbaits. Catfish are in the river channels, at 15 to 20 foot depths. Shad, clam snouts and chicken livers are all effective. Crappie are uncooperative. They may bite for a half an hour, and then ignore you for hours. Bream can be found around shallow weeds and docks.

The smallmouth bite is happening from 11 PM till 3 in the morning. Largemouth bass are hitting drop shots and Roboworms. Stripers will go for deep downriggers. Cats are deep, but will take shrimp and chicken livers. Bluegills are “anywhere and everywhere” and are hitting night crawlers. The water is fairly clear, in the low to mid 80s and at full pool.

The Upper New River is going through some muddy stages due to dam releases but clients this week have still been landing nice smallmouth, walleye and muskies.

Harry Murray says that the fishing in both the North and South forks of the Shenandoah is good. In the North Fork, the best area is from Mt. Jackson to Tom’s Brook. The water is 78 degrees, very clear and at an “ideal” level.

There are more active fish, so go big or go small. Because plenty of baitfish are plentiful, bass need to be enticed into biting.

Capt. Chaconas says it’s time to try big soft plastics. Mizmo 10 inch Hogzilla worms in June bug can be rigged Texas or shaky head. For Texas rig, use a 3/16-ounce weight and pitch on 14-pound test GAMMA Edge fluorocarbon line. For the shaky head, try a 1/4-ounce head on 10-pound test GAMMA Copoly or smaller line. Shake in one spot for a while.

With crankbaits, try Mann’s Baby 1-Minus to cover a lot of water. Chartreuse patterns for clear water, Shad patterns with sun and stained water. Over grass with higher tides, larger more buoyant Lucky Craft BDS 4 crankbaits on 14-pound test Edge can be cranked down to the grass, stopped. Short upward snaps trigger strikes.

Stripers are being caught in the main lake regions. Jim Henby and clients had great success recently by using herring on down lines at 26 feet. The most productive times are the first 2 hours of the morning and during major feed times of the solunar table.

All bridges are holding keeper crappie in 10 to 20 feet ranges. Up-lake fish are holding on ledges in the same depths but will move up in a couple of weeks following the schools of bait.

Nicer catfish can be caught on herring and shad in 20 to 30 foot depths.

Capt. Art Conway reported that Chickahominy Lake mid-day water temperatures were in the high 80’s to low 90’s in the lower main lake.

Blues on the Rappahannock

I am Jim Brewer, Editor of the new CvilleBuzz, a humble on-line attempt to entertain those, not only … END_OF_DOCUMENT_TOKEN_TO_BE_REPLACED