You are here: Home / Outdoor Report / Nags Head Heating Up 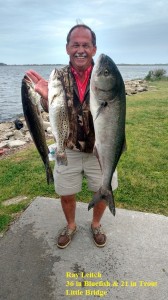 Though Tuesday started off with downpours and rough water, the day cleared by late afternoon and there were fish caught.

The Little Bridge anglers had another successful day catching lots of keeper trout and, again, some big Bluefish. Ray Leitch and family from Staunton, VA caught keeper Trout and Bluefish. And don’t forget there is another place to sound fish on the causeway across from Pirates Cove Marina under the Bridge.

On Wednesday, the Little Bridge was still the place to be. Nice Trout, Blues, Drum, Stripers and Flounder added to the mix with one 20-incher caught. Anglers are shoulder to shoulder.

All Piers are catching Bluefish. Avalon added Trout, Puffers and reported an 8-½ lb. Bluefish. Jennette’s had a 10-½ pounder. Nags Head Pier said they are catching 2 pounders. OBX reported lots of Bluefish in the surf heading north.

On Wednesday, just a couple of boats ventured out of Oregon Inlet and returned in with some nice yellow-fin tuna, mahi-mahi and a wahoo.

Finally, the spring fishing scene is coming together, and water temperatures will get a boost with weather warming into the eighties this week.

The first catches of big red drum from the Eastern Shore were reported. As schools of big drum filter into the lower Bay and spread among the shoals and breakers lining the Eastern Shore barrier islands, local anglers are intercepting the early season drum using blue crabs and peelers. Some of these bulls are well over 45-inches. Black drum will make a solid showing in these same areas.

Tautog anglers had a good week, with the bite taking off in Bay and inshore waters. Bay anglers are catching limits of fish, with most bites coming from the pilings and the tubes of the CBBT, with the best luck happening with fiddler crabs, when you can get them. Most fish are ranging from 3- to 5-pounds. Deeper water wrecks are giving up some bigger fish, but this bite is slower. Big sea bass are also competing for your offerings on the same structures, but sea bass remain off limits until mid-May.

The flounder bite is still emerging in lower Bay waters. Some limits of keepers are rewarding those who put in their time along the Eastern Shore seaside inlets, Oyster, Magothy Bay, and Back River Reef. Look for this trend to heat up with the warmer temperatures.

Pier anglers are happy again as croakers are active at local piers. Plenty of medium-sized hardheads are hitting along the oceanfront on squid and bloodworms, at the Oceanview and Buckroe piers and within the Bay’s tributary rivers. Decent-sized sea mullet are also making a showing in these same locations and are hitting bloodworms. Nice snapper bluefish are in lower Bay waters, while also making a good run into Rudee Inlet.

Puppy drum are providing very good action in Rudee Inlet, with numbers of trout also showing in Little Creek and Lynnhaven. Speckled trout are responding in these same areas, and reports of the first flounder catches of the season in Rudee Inlet are trickling in.

The deeper water off the Virginia coast is still the place to crank up tilefish, black-bellied rosefish and grouper from over 300 feet of water. But a word of warning, pesky dogfish are still a nuisance, but they will begin to thin out soon. Jumbo black sea bass are also in the same areas.

Offshore opportunities are pushing this way. Most of the action is still happening off North Carolina’s coast, with bluefin, blackfin, and yellowfin tuna presenting a variety for the fleet.

On Tuesday, it was a sketchy start with periods of rain, but those who braved the weather were rewarded with fine catches of puppy drum and bluefish, even some citations. The weather cleared up nicely in the afternoon and the bite continued with more Big Blues hitting on bait and metal all day as were Red Drum and Sea Mullet.

On Wednesday, The Point had plenty of Big Bluefish caught on metal and bait. Ramp 44 had skates and sharks. The Point also had big biters. Avon had a few Sea Mullet and Blue Fish. There were a few Spanish jumping but none caught.

What began as an overcast morning on Wednesday turned into a beautiful day to be out fishing. The wind fell out and abundant sunshine led to good fishing conditions offshore. The Blackfin Tuna bite provided a lot of action and charters returned with all they wanted. Gaffer size dolphin produced a good bite and helped to fill the boxes. A few Wahoo showed up as well. Big bluefish were caught by inshore anglers. The weather for this weekend sounds like summer time temps with an excellent chance of getting out to fish.

Contributed by Darrell Kennedy of Anglers Landing (540.672.3997) Water temperature is around 70 degrees and clear with both bass and crappie in all phases of the spawn. They are being caught on small minnows and jigs. A few big bluegills have been seen making their beds as well. With the recent rains, the walleye bite has picked up and some nice ones being caught on a variety of baits, with minnows being the bait of choice. With warmer weather forecasted, this weekend should be fantastic.

For over 30 years, my 60-year-old azalea bush has predicted the spawn. It looks like we have a week or so to go. Water temperature and length of day have a lot to do with nature’s timing.

Warming water on hold with cooler temperatures and clouds, around 68 degrees.

Either trigger strikes by contacting grass with Lucky Craft LVR D-7 lipless cranks or feed them by slowly working Texas rigged Mizmo Quiver Stix. For the LVR D-7, use 12-14 pound test Gamma Edge Fluorocarbon line. This enables better snaps out of grass and solid hooksets. Slowly crawl over grass and engage grass and pause before a short snap and pause. Same with chatterbaits.

For Texas rigs, use a 1/8 ounce unpegged bullet weight on 14-pound test Edge. Slowly pull to grass. Pause and pop free and allow to fall. Slowly shake and pause. Use long rods and fast reels to set hooks.

Over hard cover, Mann’s Baby 1-Minus on 12-pound test Edge can be deflected off wood or rock. Pause and twitch. Use Mustad KVD triple grip short shank hooks. Paint bait bellies orange. Vinyl paint with UV is best, but orange nail polish will do.

Capt. Art Conway of Conway’s River Rat Guide Service (804-746-2475) out of  Ed Allen’s Boats and Bait reported that Chickahominy Lake mid-day water temperatures were in the high 60’s in the main lake and low 70’s in the  major creeks on Wednesday.

I am Jim Brewer, Editor of the new CvilleBuzz, a humble on-line attempt to entertain those, not only … END_OF_DOCUMENT_TOKEN_TO_BE_REPLACED