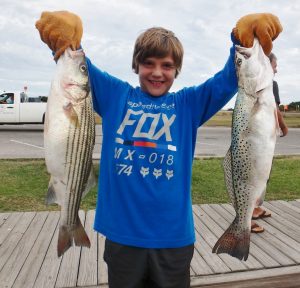 “The fishing is unreal,” he said. “Everyday.”

The speckled trout fishing has been very good around Oregon Inlet for the past few years, but it seems to be getting better and better with numerous five-pound plus fish finding their way into live wells. Same with puppy drum. The really good news is that – while Virginia struggles – the striper fishing is fabulous, with lots of very nice fish coming from the sound.

And if his parties limit out on specs, stripers and pups, Capt. Stecher is also finding good bottom fishing for sea mullet, black bass and other species. Contact Reese at 252-449-0232 or www.beachbumfishing.com to book a trip.

Sounds like it’s time to head for Nags Head. And bring your coolers!

Cobia are going, going, gone, heading south for the winter. Same with the Spanish Macs. Spot fishing is excellent and there are still some nice croakers hanging around. Flounder fishing has been very good inside the inlets and off the coastal wrecks. Specks and puppies are biting at Lynnhaven and Rudee inlets and along the creeks on the Eastern Shore.

Bluewater boats are back in action and hooking up with yellowfin, white marlin, wahoo, Mahi and kings.

This week brought much needed rain to Virginia’s rivers. On the Shenandoah, smallmouth bass are active but like slow presentations. On the New River, it’s top water time – big time. Bass are hungry. The Upper James is coming back to life but levels are still on the low side. On the tidal James, lots of blue cats up to 40 pounds are biting.

The Chickahominy River has been giving up lots of bass on the drop-offs along the edges of lily pads. Mann’s Stingray grubs have been very effective. Stripers are also active and hitting Rat-L-Traps on the Chick.

It’s striper time at Anna – early and late, as usual. Crappie schools are tight – find one fish and you’re in. luck. The schools are at mid-depths now but will go deep soon. Largemouth are holding on deep docks. At Buggs, the lake is at 295 and stable. Crappie anglers are loading coolers with 1-3-pound fish. Small minnows fished over brush piles and around bridge pilings are most effective. Bass are going shallow. Stripers are active, hitting Sassy Shads fished under the schools of shad minnows, close to the shoreline.

On the Chickahominy Lake, most all species are active. Some nice stripers running to 10-pounds are hitting trolled lures and spoons. On Smith Mountain, striper fishing is getting better with each tick downward from the thermometer. Bass fishing is good to excellent when they are pulling water. Otherwise, it’s just fair.

I am Jim Brewer, Editor of the new CvilleBuzz, a humble on-line attempt to entertain those, not only … END_OF_DOCUMENT_TOKEN_TO_BE_REPLACED