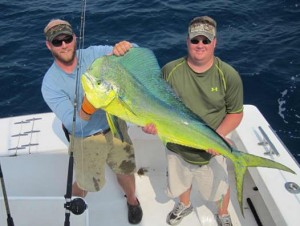 Offshore, weather permitting, the bite can be good with nice yellowfin tuna, bigeye tuna, and Mahi the primary catch. Swordfish are still a possibility at the Norfolk Canyon if boats can find a good weather window for overnight trips.

Windy conditions are keeping boats at home for a few days, but once the weather clears, expect the rockfish action to pick up where it left off as schools of big striped bass enter the Bay. Some impressive fish are hitting the docks lately, with several rockfish weighing in at over 50-pounds. The larger fish are still coming from the fleet of boats drifting with live eels off the eastern side of the Bay. Anglers trying their luck dunking eels along the High Rise section of the CBBT at night are also finding some respectable takers averaging 30-pounds. But hurry if you want to keep one of these brutes, as the Bay season ends at the close of the year. Boats can also still find school-sized stripers ranging from 22- to 38-inches along the lower Bay bridges and tunnels, and under working birds in open Bay waters.

Speckled trout enthusiasts continue to pick away at what whatever is available. Most backwater locations are reporting similar results, with Rudee, Lynnhaven, and Little Creek Inlets, as well as the Elizabeth River hosting catches of trout ranging mostly to around 16 to 20-inches. Casters are finding luck using a variety of baits, including jigs, Mirro-Lures, and Gulp baits. Puppy drum are also a possibility in these same areas.

Limits of keeper-sized tog are still coming from offerings of crab on several Bay and inshore structures this week. Offshore wrecks will become more attractive to tog hunters as the waters cool and other species become less available. Folks targeting sea bass on deeper water wrecks are catching plenty of jumbo fish, with some exceeding five pounds, but these tasty fish become off limits at the end of the month. This may also be your last opportunity to boat some big wreck flounder, which are still taking bait drifted over both inshore and offshore structures, along with some big triggerfish. Small pods of false albacore are most everywhere near the Triangle wrecks this week. Chopper-sized bluefish are likely on the move, but a these fish can be intercepted on offshore structures for a while longer. Bluefin tuna are also a possibility, but be sure to check the regulations before you target these massive tuna.

On 12-31, fishing was fair for those who ventured out in the wretched weather. A few Bluefish, Sea Mullet and Drum were reported at Ramp 49.  Bluefish were caught at most ramps. Cape Point caught Sharks and Skates. Dominic Hockenbury caught a few fish at the Lighthouse jetties.

On 12-29, the Fishing Center noted that a couple of Near Shore and In Shore boats try their luck, though the weather was a bit windy and the waters were choppy. The fishing was just not happening. The boats caught Stripers but were all catch and release size.

Red Drum & Tackle reported that sharks were biting at the point today. Bluefish were caught up at ramp 38. Ramp 49 reported bluefish, blow toads, flounder and sea mullet. Down at Ramp 55, puppy drum and flounder were reported.

The fishing was slow Tuesday with a northeast blow. Puppy drum caught on Fish Bites and blow toads caught on shrimp were reported at Ramp 43 along with sea mullet and bluefish.

Rivers were largely unfishable due to heavy rains. Lake anglers faired better. Walleye were caught at Lake Anna along with stripers on an early morning top water bite. Ten pound-plus stripers were biting at Buggs Island. Some reports surfaced of large brown trout caught at Lake Moomaw. Perch and crappie were also caught at Moomaw.

Capt. Art Conway of Conway’s River Rat Guide Service (804-746-2475) out of Ed Allen’s Boats and Bait reported that blue cats and a few bullheads were in channels and winter holes and were hitting live minnows and cut bait. Moderate numbers of crappie were in loose schools in the main lake on deeper flats, along channel edges, and in channels, usually at depths of 7 to 15 feet, sometimes suspended, and frequently in the neighborhood of wood cover. In areas of stronger current, most crappies were in eddies and other protected spots out of the main current. Active crappie were hitting live minnows, Wright Bait Co. curlytail jigs, small tubes, Kalin crappie scrubs, small swim baits, jigging spoons, and blade baits. Some small to medium yellow perch were scattered on deeper main lake flats and were hitting live minnows, small jerk baits, spoons, and small jigs. Most bluegill and shellcrackers had moved to the deep edges of hydrilla flats, to mid-depth wood cover, or into channels and when active were hitting live crickets and worms, small blade baits, tubes, and jigs. Most bass and pickerel were on deeper flats and in channels in the main lake and were hitting live minnows, spinnerbaits, swim baits, stick worms, crank baits, jerk baits, and jigs. In areas of stronger current, many bass were in eddies, frequently in deeper water next to shoreline structures.

A December to Remember

This is the warmest December ever! In light of this, baitfish are still moving around and bass are close to drops and on hard cover.

Water remains near 50 degrees, but cooling down to the mid 40s going into the weekend.

Toss these on 10 pound test GAMMA Edge fluorocarbon line. Use this in areas up to 6 feet deep. Spinnerbaits on 12-pound test Edge cast in the same areas will work. Use a gold Colorado willow tandem with white skirt. Cast and allow this to go to the bottom and slowly retiree, dragging to keep the bait on the bottom. Lift over cover and drop.

Soft plastics like Mizmo tubes with insert heads, 1/4 ounce Mizmo Barbwire shaky heads, drop shot and split shot, and Mann’s Stingray grubs on 1/4-ounce ball head jigs can be worked slowly and down the drop close to flats. Drag and stop all baits. Soak plastics in garlic Jacks Juice Bait Spray. Punisher hair jigs on 8-pound test Edge can be dragged as well. The Jacks Juice soaks into these hair jigs. Use a small craw trailer. Shake and drag. Pitch to visible cover.

Always keep a Silver Buddy tied on to target fish on the drops. A half-ounce silver on 10-pound test burped with various presentation. Short or big rips until bites are triggered.

I am Jim Brewer, Editor of the new CvilleBuzz, a humble on-line attempt to entertain those, not only … END_OF_DOCUMENT_TOKEN_TO_BE_REPLACED