You are here: Home / Outdoor Report / Made in Spades 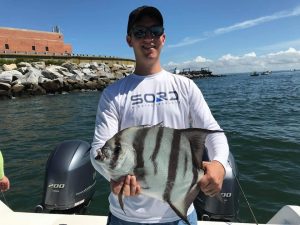 Last week started off badly, with everyone stuck at the dock in Virginia’s saltwaters. But after the wind died down, the good fishing continued. Spadefish are abundant and are congregated around buoys, pylons of the CBBT and the Chesapeake Light Tower. Anglers fishing with Aquaman Charters did well with the spades last week and Captain Craig Paige, Paige II Charters, also got in on the action.

Big red drum are still plentiful throughout the lower bay. Latimer Shoal and the shallow water near the northern section of the CBBT are the two areas where most of the fish are caught.

Sheepsheads are hanging around structure. Anglers are having good success at the Cell, CBBT, Plantation Light, York Spit Light, the buoys at the mouth of the bay, the Chesapeake Light Tower, Tower Reef and most any wreck they can find.

Offshore, the tuna action is red hot and the fish are close to home, near the 900 line. Most boats have their limits before 11 am. Captain David Wright on the High Hopes filled his box by 9:15 am. Most captains completed their day deep dropping for golden tilefish or swordfish.

Good Spanish mackerel fishing continued along the oceanfront and in the lower bay. Most fish are being caught on Clark or Drone spoons tied directly to a 20-30 foot mono leader run behind a planer or in-line trolling sinker. Captain Beck from Knot Wish’n Charters said once the weather cleared, the water was a little cooler and churned up, but they found some quality Spanish mackerel. Captain Steve Wray, Ocean Pearl Charters out of Long Bay Pointe Marina put his crew on the Spanish as well. Mackerel numbers should continue to increase in the coming days.

Cobia action is excellent. Most anglers are fishing live bait in chum slicks. But always have a rod ready to sight cast. Last Friday Dr. Ken Neill and co-worker Meghan Wells tagged and released 3 cobia before the sharks moved in.

Flounder catches are on the rise along the CBBT, around inshore wrecks and artificial reefs throughout the lower bay and along the coast. Connie Barbour at Long Bay Pointe Bait and Tackle says some flounder have been landed inside local inlets.

Capt. Reese Stecher (Beachbumfishing.com) says the puppy drum bite is as good as it gets. The fish are back in the sound on grass beds and Reese knows exactly where those beds are. Call him to get in on that action.

Stan Cobb at Greentop says that Buggs Island Lake has jumped back up to high levels again, currently at 311 feet. Still, many are reporting catching plenty of bass in the 2-pound range by pitching soft plastics  to the flooded cover. The bigger bass have been much harder to find.

Lake Anna bass fishing is holding steady as five-bass limits in the 15 pound range are taking top honors in the evening tournaments. With all the heavy boat traffic and hot weather, the tournaments have been shortened to half-day and evening events. Stripers have been biting well for guides and anglers using live. bait. Some have been returning with limits in a matter of hours.

The Elite 70 event was held on the James River over the weekend with a winning weight of 18-plus lbs. Anglers were able to fish the James, Appomattox, and Chickahominy Rivers. A 16-pounder topped the winner list at a Federation event on the James at Osbourne Landing.

Overall, solid weights are being brought to the scales from the tidal rivers. On this list is the tidal Rappahannock, which many overlook as a quality bass fishery. Solid weights of 18-19 pounds are taking top honors here. These rivers are also good for big blue cats.

The upper James is falling after peaking at 12′ last week. Hopefully by the weekend, the levels will be back down around the 5’ to 6′ marks.

At Lake Orange, Darrell Kennedy of Angler’s Landing (540.672.3997) reports that water temperatures are in the mid to low eighties with fish in the summer patterns. Bass are hanging out mainly in 8 to 10′ of water feeding on bait fish. Bass can be caught on soft plastics and fast moving baits. Crappie are also staging in the 8’ to 10′ range and are feeding on small minnows. There are still a few bluegills spawning and they can be caught on red wigglers and nightcrawlers. Some nice walleyes have been caught with live bait around the points and rocky areas of the lake. Catfishing remains strong throughout the lake with live minnows and night crawlers the baits of choice.

Topwater Tides on the Potomac

I am Jim Brewer, Editor of the new CvilleBuzz, a humble on-line attempt to entertain those, not only … END_OF_DOCUMENT_TOKEN_TO_BE_REPLACED