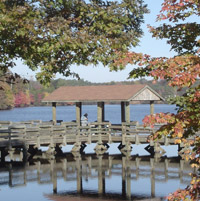 Lake Orange, one of Virginia’s most productive lakes, is now open for business. Actually, the lake is always open throughout the year, but the marina, Angler’s Landing, opened their doors for the spring season last weekend and fish are starting to bite.

Angler’s Landing sells lures, live bait and snacks and rents 14-foot jon boats and electric trolling motors, giving anglers access to nearly every freshwater fish that swims. The 124-acre Game Department-owned lake is one of the top largemouth lakes in the state. With a large population of gizzard shad on hand, the bass grow fat and sassy. Numerous 10-pound plus fish are weighed each year, and right now, as the big females go on the feed, is the best time of the year to catch one of those “hawgs”. The lake also offers an outstanding bluegill and redear sunfish fishery. Citation sized fish to a pound and more are common. That bite should begin in the next two weeks.

Catfishermen are also in their element at Lake Orange. The Game Department stocks catchable size channel cats each spring, and the fish grow quickly. Ten pounders are available. Another fish growing to epic proportions is the carp. English fishermen come to Lake Orange each year to try their hand with some of these tackle busters – 30 pounds and more.

Next to Buggs Island Lake, Lake Orange is one of the best crappie lakes in Virginia. The black crappie are plentiful and reach citation lengths of 12- to 16-inches. Add to that assortment a nice yellow perch population, a few northern pike and lots of chain pickerel, and a fisherman does not lack for choices.

Darryl Kennedy at Angler’s Landing says the bass fishing is very good now, as is the yellow perch action. Crappie are heading for shallow water and that bite should kick off any day.

Lake Orange can be reached by taking Route 629 off of either Route 20 or Route 522, depending on where you are traveling from. Directional signs for Lake Orange are posted along these roadways. Travel on Route 629 until you see Route 739. Route 739 will take you to the peninsula located in the middle section of Lake Orange.

A gully washer on Thursday puts many Virginia rivers in the un-fishable category. Yellow perch were biting well on the Chick, the Potomac and lower Rapp. Bass fishing has been good on the James and Chick. Water temps should move up into the 50s shortly, when the action takes off.

Trout streams are full of water and full of fish.

Best spots to try are Anna and Buggs. The crappie bite is on at Buggs, where the lake level remains in the 300-range. Very good bass action at both lakes. Crappie are stirring at the Chickahominy Lake.

All is quiet on the home front in Virginia waters, as angler await the report of that first big flounder caught off Wachapreague.

On the Outer Banks, it’s still dead at Nags Head with the exception of dog sharks and skates. At Hatteras, the tasty puffer fish are biting along with a few sea mullet. Bluefish were reported at Ramp 55. The ocean striper season has begun in Carolina with a 1-fish per person limit, minimum 28-inches. In joint waters, anglers can keep 2 fish daily, 18-inch minimum.

Offshore, a few boats ventured out of Hatteras last weekend and caught some big wahoo, lots of blackfin tuna and a few gaffer dolphins.

I am Jim Brewer, Editor of the new CvilleBuzz, a humble on-line attempt to entertain those, not only … END_OF_DOCUMENT_TOKEN_TO_BE_REPLACED