You are here: Home / Outdoor Report / Jacks are Wild 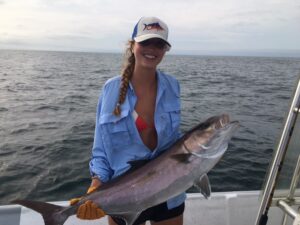 Jacks are wild, amberjacks that is. They go wild at the end of a fishing rod. No fish alive – pound for pound – fights harder, and they are fighting fishermen right now from the wrecks off Nags Head to the towers along the Virginia Coast.

The Brewer Family, Jimmie, James and Virginia (my son, grandson and granddaughter), tried their luck with amberjacks while fishing with Ace Captain Reese Stecher out of Oregon Inlet.

Catching a calm day, the party sailed about 8 miles out and found the ‘jacks ready, willing and able. They hooked 7 in all, putting 6 on the deck. Switching to redfish black in the sound, the group passed by a big school of false albacore on the way in. False Albies are also a blast to catch – especially on a fly rod.

Because the wind and drifts weren’t right, the puppy drum were uncooperative, but James stuck and boated a 10 pound bluefish. Jimmie had Blackened Amberjack that evening at the beach cottage and James ate so much that he truly suffered. They were delicious, everyone agreed.

Capt. Stecher can be reached at beachbumfishing.com. There are still lots of amberjack, specks, pups, stripers and bluefish to be caught. Book a trip.

Pier fishing has been outstanding with lots of sea mullet. spot, croakers and sheepshead coming on deck. There were even some king mackerel and tarpon caught from the ends of piers.

Surf anglers found flounder, croaker, spot and sea mullet willing to bite. Nearshore boats targeted ribbonfish and there plenty to be caught. The Bluewater fleet returned with Mahi, yellowfin tuna, Wahoo and tilefish. There were also a number of billfish releases – blue and white marlin, plus sailfish.

Red drum are beginning to surface in the lower bay, making them easy to spot. Cobia are scattered throughout the bay – sight casting is the best tactic. Spanish Macs and ribbonfish are being caught by trollers on diving plugs and spoons. Flounder fishing improves weekly with lots of 4 to 6 pound fish showing up. Spadefish are plentiful near the CBBT. Sea bass to 7 pounds were caught at the Triangle Wrecks.

Everything is biting offshore – billfish, tuna and Mahi. Fishing is great!

The rivers have turned on for smallmouth angling. All are in good shape, though a bit low. Flukes and plastics are putting fish in nets during the mornings while a topwater bite is happening in the afternoons. Some nice catfish and largemouth were caught on the Shenandoah.

Great reports continue to come from the Potomac as the prolific vegetation is holding lots of bass. Snakeheads have been another popular species to target. Anna action for largemouth is good. Nineteen pounds won a local tournament. Crappie are deep everywhere, but anglers at Buggs Island have been catching some nice silvers near the bridges.

I am Jim Brewer, Editor of the new CvilleBuzz, a humble on-line attempt to entertain those, not only … END_OF_DOCUMENT_TOKEN_TO_BE_REPLACED