You are here: Home / Outdoor Report / It’s Spot On in the York 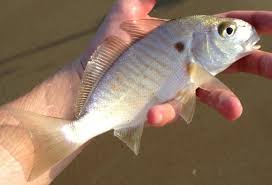 The spot bite is on in the York and other Virginia tidal tributaries. This is the time of the year for the “yellow bellies”, the big fat spot that find blood worms irresistible. Spot, a member of the drum family, are so named because of the distinct black spot behind each gill. The short-lived fish feed voraciously as fall approaches and now is the time to go spot fishing. Spot, by the way, make perhaps the best bait of all for doormat flounder, so where there are schools of spot, there will be big flounder. Spot, anyone?

Elsewhere in Virginia saltwater, Stan Cobb with Greentop reports that sea bass and flounder are available at the Triangle and other ocean wrecks. Tilefish have been biting out in the deeper waters of the Canyon.Offshore charters are returning with good catches of yellowfin, wahoo and mahi, along with decent numbers of white marlin.

Inside the bay, there has been a good run of sheepshead catches over the last 2 weeks. Speckled trout are showing up in more places, like Poquoson Flats, Goodwyns Island, the Gwynn’s Island area, areas at the mouth of the Rappahannock river and the seaside creeks on the Eastern Shore. Some are using fresh, live shrimp, that have been showing up in the creeks. The cobia action has not slowed at all, and should continue after the season closes, at the end of September. It will be catch and release after that. The red drum are roaming throughout the bay and anglers are finding them as they search for cobia, and sometimes as they  bottom fish for flounder. The artificial reefs in the bay attract the drum, cobia, and flounder, during this time. This is still the time for the biggest flounder, but reports have slowed a little this past week, which is probably due to the windy conditions.

There have been plenty of bluefish at the Point this week along with spot, sea mullet and trout all along the beaches. Small sea mullet, spot, trout and pompano are up and down the north beaches. In the sound, the Little Bridge on the Nags Head/Manteo causeway reported good catches of trout.

Pier fishermen caught sea mullet, spot, trout, drum, founder, some stripers, black drum and pompano. It’s been a good week. Lots of trout are being caught inshore – one of the best falls in memory. Stripers are also being caught inshore. Nearshore boats put blackfin tuna, Spanish and blues in their live wells. Offshore, it was another good showing of yellowfin, blackfin and wahoo. One boat out of Pirate’s Cove gaffed a 388-pound swordfish. An Oregon Inlet charter landed a 130-pounder.

Lake Anna bass have been biting well, says Stan Cobb of Greentop. Twenty-one pounds won a recent tournament out of Sturgeon Creek Marina. With the shad migrations, the upper lake has produced the best fishing.

This should continue into November. Crappie have been hanging around brush piles in the 12’-18′ range and along the bridges. The best method is usually live minnows on slip floats. Kerr Lake elevation is at 298′. Crappie there are holding on brush piles in deeper water zones. However, some of the bigger crappie are loners, and are caught along stumps. Many of the Kerr bass now being caught are coming from the main lake points and nearby flats. Topwater baits are excellent tools for covering water and finding bass. Walking baits are especially good. Crankbaits in the mid-depth ranges have been the most productive, as far as crankbaits go. Some are reporting quality catches on Carolina rigs also.

Tidal river bass are gearing up for the fall season as well. Jim Miller of Henrico nailed an 8-pounder on the Chickahominy River while fishing from a kayak. Bass are being found inside the creeks, and along the main river. Jigs, crankbaits, spinnerbaits, and topwater baits are doing the trick. These baits are working on the James as well. Baitfish schools can be seen traveling throughout the river, but the areas inside the pits are getting thick with bait. Lipless crankbaits are a fantastic tool when following schools of bait, as they can be cast long distances and attract strikes from far away with their loud sound. Bass fishing on the Rappahannock River has been very good. This fishery often gets overlooked by bass fishermen, but this can be a mistake. The smallmouth fishing will soon improve as we enter October, on the upper Rapp, and the James. Topwater action can be outstanding during this time. Often, the topwater bite will last all day, even during bright, sunny days.

I am Jim Brewer, Editor of the new CvilleBuzz, a humble on-line attempt to entertain those, not only … END_OF_DOCUMENT_TOKEN_TO_BE_REPLACED