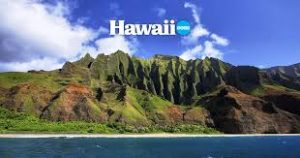 When we touched down at the Honolulu Airport it was 88 degrees. Perhaps 85 or 86 would have been more comfortable, but I’ll take 88 in the middle of November. This was to be our second visit to the Aloha State in the past two years. This beautiful island paradise draws tourists like a magnet – an inviting climate, extreme beauty and incredibly friendly people. There are only two problems with a trip to Hawaii. Getting there and coming home.

Hawaii is a long way from Charlottesville. It’s about halfway around the world and it’s a pretty big world.

To connect with Norwegian Cruise Lines’ Pride of America, we drove to Baltimore, lifted off on Thursday morning before even the roosters were stirring, landed in Dallas and took off again in mid-morning on somebody’s time. Then it was about 8 hours to Oahu. Eleven hours is a long time to sit in place, but a trip to Hawaii is worth the sacrifice.

Again, we chose to cruise and see all the major islands as opposed to flying in to one – even though here are plenty of things to do and see on each of the islands. But there were so many things we didn’t get to see on the last cruise, we decided to take the same cruise on Norwegian’s Pride of America.

We boarded the ship around 4 pm, checked through security and stumbled up to our room, At the end of this very long day, we were exhausted. We went to bed at 8 PM Hawaii  time, but in the wee hours of the morning our time. We slept like babies, rocked to sleep by the silent lullaby of gentle waves.
Tomorrow, Maui – a special place indeed.

I am Jim Brewer, Editor of the new CvilleBuzz, a humble on-line attempt to entertain those, not only … END_OF_DOCUMENT_TOKEN_TO_BE_REPLACED