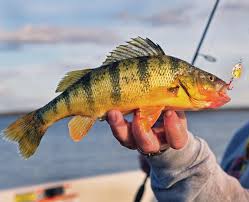 Not much happening, but it won’t be long. Freshwater fish react to the longer days and slight upticks in the water temperatures. Yellow perch are generally the harbingers of spring. When they begin their spawn, things start happening. Below is an update.

There are some yellow perch biting behind Roosevelt Island. Capt. Steve Chaconas says the best bass action comes from the water discharge areas at Blue Plains, Four Mile Run, and Possum Point. Bass are more active and drawn into these areas along with baitfish. Presentations are still slow, but fish will move to eat a bait.

The blue catfish bite has been excellent. Cats don’t seem to mind the cold as much as some other species. White perch, yellow perch and stripers are in the lower river.

The water temp near the dam is a reasonable 50 degrees. It’s 38 to 40 up-lake, so guess where most fish are biting? Bass in the 2 to 6 pound class are on main lake points.

Some stripers are being caught around The Splits.

Great fishing for line-busting blue catfish. A few yellow perch are active. Crappie are taking minnows near the barge pits.

Normally one of the first rivers to give up yellow perch, but not much action to date.

Crappie are still hungry on the Chick. Fishing with Capt. Conway, Carolyn Conway had 13 crappie and 2 pickerel.   Tom Porter had 11 crappie, one blue cat and a pickerel.

Small bass are beginning to stir at Gaston. When the water is moving, stripers are feeding near the bridges.

At Buggs, the water level is 4 feet below normal pool. The crappie bite is picking up, but not like it’s going to be in a few weeks. Bass’n is fair. No report on stripers.

Brave anglers have been catching some larger stripers in the coves on the northeast side of Smith Mountain. A few walleye are biting in deep water.

No striper movement yet, but the walleye are in a pre-spawn run.

Nothing here, but a few trout are taking streamers below Gathright.

A few catfish are being creeled, and muskie action was fair before the water began to rise.

Most of the streams throughout the state are in excellent condition for fishing, following some rain and snowfall, but the water is still “brrrr” cold.

I am Jim Brewer, Editor of the new CvilleBuzz, a humble on-line attempt to entertain those, not only … END_OF_DOCUMENT_TOKEN_TO_BE_REPLACED