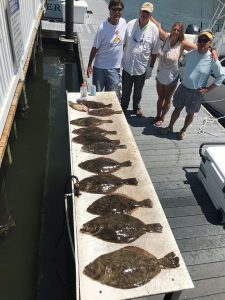 Flounder action has really picked up in Virginia waters. The big flatties are being caught along the Chesapeake Bay Bridge-Tunnel and on rough bottoms. Many of the larger fish are being taken around near-shore wrecks and artificial reefs. Drifting flounder rigs and jigging have both been effective. Remember, large baits catch big flounder.  Rudee, Lynnhaven, Little Creek and Eastern Shore Inlets are holding some small flounder along with a few speckled trout and puppy drum. Fresh whole shrimp under a popping cork rig is your best bet for the pups and specks.

Boats trolling Clark spoons behind an in-line weight or planer along the oceanfront or near tidal rips in the Bay are catching nice Spanish mackerel. Anglers working coastal wrecks are catching triggerfish.

Cobia are being caught throughout the lower Bay. Both sight-casters and anglers anchoring and chumming are catching nice fish.

Red drum are cruising the lower bay. Occasionally anglers encounter large schools on the surface. The trick is to ease up near them without spooking them. These fish are usually too large to keep, and must be released as they are likely well over the maximum 26-inch size limit.

Sheepshead are hanging around the pilings of the CBBT now. Small crabs are the best bait. Spadefish remain plentiful. Look for them around buoys, pilings and over wrecks. The Chesapeake Light tower is a favorite spot but some of the larger fish are being found in the Bay, at the Cell near Cape Charles.

Croaker are available throughout the lower bay now and spot are looking for blood worms up in the rivers.

The offshore fleet has been finding a few tuna, some large wahoo, white marlin, a few blue marlin and sailfish. Dolphin catches should increase soon. There have been some really big ones laned to our south. Look for an outstanding Mahi-Mahi season.

Deep-droppers are enjoying excellent catches of golden and blueline tilefish, along with sea bass. Amberjack are hanging near the south tower.

The weather is hot but the ocean is cold.  People jumping out as quickly as jumping in.
There have been Spanish reported at Ramp 45 and sea mullet scattered along the beaches. Some nice pompano were caught in Frisco. No reports of surf action on the northern beaches
The Little Bridge on the Nags Head/Manteo causeway reported trout and black drum. The piers produced blues, sea mullet and croakers
Nearshore boats are releasing red drum and catching Spanish, albacore, moonfish and kings. Sound fishing remains excellent for trout and puppy drum. Tuesday produced a good bite for offshore anglers for blackfin, yellowfin, tilefish, some mahi, scattered wahoo, black sea bass, and limits of tiles. The boats also had lots of billfish flags flying.

Above Fredericksburg, smallmouth are hitting topwater lures early and late in the day. The tidal Rapp is giving up nice largemouth in downed timber and undercut banks. Blue catfish are taking live white perch and cut bait.

The smallmouth bite is excellent. Some huge largemouth are also being reported.  Catfishermen are doing well with chicken livers, cut bait and live shiners.

Bass are taking Silver Buddies, crankbaits and large plastic worms in deep water on ridges and points. Stripers are going for live shad, particularly at Rose Valley, the Splits and Terry’s Run. Catfishing is on and off. Crappie schools are suspended over creek channels and along bridge pilings in very deep water.

Lots of smallmouth bass are being caught above Richmond on weightless Senkos and plastic grubs. Largemouth are holding on points and wood cover in tidal waters. The outside bends of the river channel are producing good size blue and flathead catfish caught on cut eel baits.

Buzzbaits, frogs and plastic worms are the preferred baits for bass anglers. Lily pad fields and cypress trees in deeper water provide the best structure, although the hydrilla beds are also giving up some nice fish on plastic jerkbaits and frogs. Catfish are biting livers and nightcrawlers.

Stripers are being caught by vertical jigging with Hopkins spoons at Nutbush Creek and County Line Creek, on the lower end of the lake. Rattling crankbaits and plastic lures in pumpkinseed or June-bug colors are taking largemouth bass. Crappie are located on brush piles in 10-12 feet. White bass are hitting doll flies, 1/4 oz. Rat-L-Traps and small spinners from Clarksville to Bluestone Creek.

Striper fishing is good near the islands, at the “S” turns and off the mouth of Gills Creek. Most of the fish are being taken early in the morning or at night. Largemouth bass are being caught in 18-25 feet of water on deep-diving crankbaits and plastic worms.

Trout are rolling on the surface early and late in the day. A few 5-7 pound brown trout have been caught by anglers fishing deep with live minnows. Channel cats are being caught on cut bait. Bass are taking topwaters early and late, and plastic worms in 15-18 feet during the day.

Excellent smallmouth bass action for 2-3 pound fish on Baby Torpedoes and plastic grubs. A few musky are reported. Walleye are being taken by night fishermen on live bait, below the dam.

I am Jim Brewer, Editor of the new CvilleBuzz, a humble on-line attempt to entertain those, not only … END_OF_DOCUMENT_TOKEN_TO_BE_REPLACED