You are here: Home / Articles From the Past / Dogfish Days 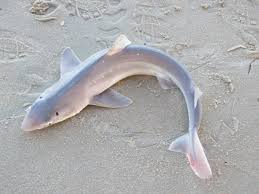 For the next month or two, about the only fish biting in the surf in Virginia and North Carolina will be dogfish. Small sharks. Atlantic spiny dogfish to be exact. And there are no shortages of these bait snatchers.

While there is little or no consumer or sporting interest in dogfish in the United States – they are considered trash fish – they are prized in Europe for their use in the classic Fish ‘n Chips, so popular in England.

Dogfish are actually pretty good to eat and fairly easy to clean. Kill the beasts, fillet them, and remove the skin. They are excellent fried or on the grill. They don’t have that characteristic fishy taste.

There is no size limit, not any creel limit for spiny dogfish in either Virginia or North Carolina. NC regs plainly state that fact, but the Virginia regs were apparently written by a roomful of drunken lawyers. It sounds as if you can keep no sharks, but in fine print, this excludes spiny dogfish.

These smaller sharks (they average a foot or two but can reach 3 and 4 feet) range from Florida to Maine, and they like cold weather. In fact, they spawn in the winter in the frigid Atlantic waters.

Like all sharks, they do not lay eggs but give birth to live young. The average female has about 6 pups.  These sharks also can live a long time – some as many as 35 to 40 years.

Dogfish will eat most anything they can swallow, especially crustaceans. Larger dogfish like to eat jellyfish, squid, and schooling fish. I often wonder what the dogfish that bite in the surf in January and February find out there to eat. But if you toss a bait anywhere in the surf, they’ll find that.

So, for the next few months, dogfish will be the stars in the saltwater reports. If you catch one, eat it. They’re good.

In the surf, it has been dogfish and skates on the northern beaches. On Hatteras Island, some sea mullet, speckled trout, puppy drum and black drum have been caught.

Some huge specks have been caught back in the sounds. Stripers are plentiful near the Mann’s Harbor bridge.

Bluefin tuna have arrived offshore, and yellowfin are biting when boats can reach them.

At Lake Anna, it’s “Brrrr-cold”, but the bass are biting. A five fish limit weighing 23.7 pounds won a weekend tournament. One of those bass went 9.49 pounds! At Buggs Island, a crappie fisherman caught a 10 ½ pound bass. Water temps are now in the mid-30’s, but the bass don’t seem to mind at all.

I am Jim Brewer, Editor of the new CvilleBuzz, a humble on-line attempt to entertain those, not only … END_OF_DOCUMENT_TOKEN_TO_BE_REPLACED