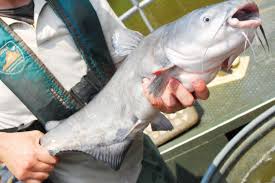 Big cars need a lot of gas. Big fish need a lot of food, even in winter. That’s why many larger fish feed throughout the colder months, and anglers that target those fish often have great success. One such fish that grows to epic proportions is the blue catfish.

Years back, there was much talk about the potential of a hundred pound catfish in Virginia waters. Scuba divers said they saw fish seemingly that large, but many said it was a fantasy. A hundred-pound catfish? Dream on.

In 2011, Richard Anderson reeled in a blue catfish weighing 143 pounds and stretching 4 feet, 9 inches. Not only was the big cat caught in Buggs Island Lake a state record, but it was also a world record for a blue catfish.

Blue cats are not native to Virginia waters, rather they were stocked by the Game Department back in the 70s in hopes that a trophy fishery would develop, and did it ever. Down on the James River in the Hopewell area, people don’t raise an eyebrow when a 50 pound blue cat is weighed. Anglers routinely catch 50 and 60 pound blue catfish. I’d say the trophy fish idea was a success.

Originally stocked in the Rappahannock, James, and Mattaponi rivers, as well as a few lakes, the big cats fish are now found in the Appomattox, Piankatank/Dragon Run, and Potomac rivers. They are spreading out across Virginia

The best shot at catching one of these monsters comes from the James, Mattaponi, Pamunkey, Rappahannock, Staunton and Appomattox rivers and down at Buggs Island Lake. The lower James offers perhaps the best fishing. You’ll need three things: A boat, some cut shad and a substantial fishing rod and reel. A big blue cat pulls harder than a Ford Fusion. They are beasts on the end of the rod.

I have fished the lower James on several occasions and we had the best luck setting up on the edge of deep channels where the fish would move up in order to feed. We used big chucks of cut shad and caught a pile of fish from a couple pounds to 40 pounds. The larger fish are not much to eat, but the ones under 5 pounds are very good.

A veteran cat fisherman once told me that a big cat will pull only as hard as you do. He advised to keep constant pressure, but not try to horse the fish in. They will give up – eventually.

In the winter, blue cats will bite throughout the day, so pick a nice day, bundle up, find some cut shad and go fishing.

Unless you are dunking a strip of squid over an ocean wreck for sea bass, it’s been slim pickings on the saltwater scene.

There have been a few – damned few – reports of an occasional puppy drum. and speckled trout in the Hatteras surf, but that’s it.

Unfortunately, there have also been reports of some speckled trout floating belly up in our tidal waters because of cold water temperatures – below 40 degrees. We had a crippling kill of specks about three years ago because of cold water. Here’s hoping that history does not repeat itself.

Freshwater action is also on stand-by as most boat ramps in Virginia have been iced in. Stripers and largemouth are biting at Anna if you can get to them and there has been good blue cat action on the lower James – when you can get to them.  Crappie and yellow perch are biding their time, waiting for a bit of warm weather to begin their spawn.

The Invasion of Cobia

I am Jim Brewer, Editor of the new CvilleBuzz, a humble on-line attempt to entertain those, not only … END_OF_DOCUMENT_TOKEN_TO_BE_REPLACED