You are here: Home / Outdoor Report / Cobia On Deck 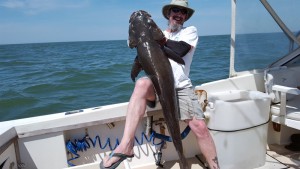 Offshore boats are having good success. Yellowfin tuna are the main catch along with good numbers of dolphin. A few big eye tuna have been caught and there have also been some billfish and wahoo catches. Bottom fishermen have had good success with blue line tilefish and some very good catches of golden tilefish.

The coastal wrecks are holding good numbers of sea bass and triggerfish. Spadefish can be found over the wrecks and flounder can be found around them. Spadefish are being caught at the Chesapeake Light Tower.

Spanish mackerel are being caught along the oceanfront and in the lower bay by anglers trolling small spoons. Small bluefish are also being caught and some big red drum and cobia are eating those little spoons.

Big sheepshead can be found at the CBBT along with spadefish. Some nice flounder have been caught around the structure. The flounder fishery in the bay seems to be off to a bit better start than the past few years with good numbers of smaller fish.

Puppy drum and some speckled trout are being caught up on the flats, up in the rivers and inside the inlets. Croaker are everywhere, but mostly small. Decent numbers of spot are being caught.

On Tuesday, the weather was nice, but there was not much news to report from the Nags Head beaches. A few Sea Mullet were reported from the surf down south. Some small Puppy Drum at Ramp 4.

The blue water fleet filled their boxes with limits of Yellowfin, an abundance of Dolphin and some Wahoo.

On Wednesday, it was blowing 22 with rough seas.

A few Puppy Drum were caught north of Oregon Inlet.

It was a little wet on Wednesday. Early that morning there was one keeper Flounder and a couple of Blue Fish caught on the Point. That afternoon produced a few Spanish. Frisco had Sea Mullet. Ramp 55 had a couple of Puppy Drum. Ramp 48 had one Pompano.

A few boats sailed out Tuesday and returned with a fair catch of Blackfin Tuna, Dolphin and Barracuda. Several billfish were seen and Sea Creature released a Sailfish. Inshore boats were able to get there fishing in with excellent catches of Spanish Mackerel a few Bluefish and Trout.

Fish are coming off post spawn and are eating most lures. Work the tides to keep your baits close to the fish. Water temperature is in the low 70s.

Take advantage of early morning low water and use Lucky Craft G-Splash 65 poppers. Larger G-Splash 80 if there is a chop on the water on 12 pound test GAMMA Copoly line. If there is matted grass, use Mann’s Super Frogs on 50-pound GAMMA Torque braid. Vary retrieves to find the mood of fish. Try buzzbaits with white skirts too! Use 30-pound Torque braid. Cast throughout the day around cover of all types: docks, pads, wood and grass. Use a free-swinging 2/0 Mustad stinger hook.

Bass are scattered and hitting well following the completed spawn. Fifteen pounds won a recent Sunday morning tournament. Crappie are busting minnows beneath deep-water docks and along bridge pilings. Stripers are feeding more and more in the low light hours.

At Lake Gaston, bass fishing is good, with Carolina rigged Zoom lizards and centipedes, in pumpkin pepper colors, taking good fish off the points. Smaller fish are being taken around the grass beds and on top water lures, early and late in the day. Bream are being caught on live crickets, while cut shad baits are taking catfish.

The water level at Buggs Island is at 305 and some bass are still back in the bbrush. Others are staging on flooded gum trees. Bass are also being caught on Carolina rigged lizards and worms in pumpkin pepper or green pumpkin colors, fished on points in 5-18 feet of water in Butchers and Eastland Creeks. Striper action is good, with fish being taken in the back of Nutbush Creek and from Buoy 16 to 18. Jigging with Hopkins Spoons or Sting Silvers is the better method, with some being caught on Cordell Redfins at night. Crappie fishing is excellent on live minnows, fished over brush piles in 8-15 feet of water and around bridge pilings. White bass are schooled and biting well. Below the dam, stripers to 15 pounds are taking pencil poppers. White perch and plenty of catfish are also available below the dam.

Night fishing at Smith Mountain Lake is best for the stripers. Best areas are the mouths of creeks and the best lure is the Cordell Redfin. Largemouth bass are hitting top water lures early and late in the day. Midday, fish shady areas with Rapalas. Smallmouth bass are schooling in open water off points and deep banks. Live bait, fished at 20-25 feet, near the dam, will produce the larger stripers.

Barring late week downpours, the upcoming weekend should provide excellent conditions for smallmouth anglers on the James and Shenandoah rivers. Muskies are tearing up buzz baits now on the New River.

The Chickahominy River is on fire. Bream, crappie and bass are all active and the catfish are hitting everything in sight. Some toothy gars have also come to net.

I am Jim Brewer, Editor of the new CvilleBuzz, a humble on-line attempt to entertain those, not only … END_OF_DOCUMENT_TOKEN_TO_BE_REPLACED