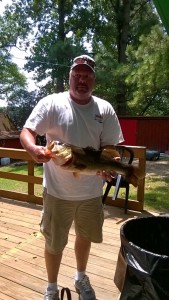 Through the years, the Chickahominy River has earned the reputation as a great spot for lots of bass. It’s the river many tournament anglers fish to increase the number of bass in their bags at weigh-in time. The Chick is not known as a “big bass” river. Well, don’t tell that to Shawn Shaefer from Pennsylvania. On a recent visit at Campers Paradise in Lanexa, Shawn fished just down river from camp and hung and landed a 7-½ pounder. Also, at last week’s Thursday Night Tournament, the big bass went 6-2 with a five fish limit weighing 16 pounds. The second place team had a big fish at 4-11 and a net weight of over 11 pounds. So the bass are biting, nice bass, and so are the catfish. Mike Johncox at Campers Paradise says that lots of cats up to 17 pounds are hitting cut eels. Crappie, bluegills and yellow perch are sulking a little in this hot water climate.

If the fishing is good in the river, it’s also pretty good up in the Chickahominy Lake. Capt. Art Conway of Conway’s River Rat Guide Service (804-746-2475) out of Ed Allen’s Boats and Bait reported that Chickahominy Lake mid-day water temperatures were in the mid 80’s in the main lake on Wednesday (7/29/2015).

Fishing with Capt. Conway, Read, Hil, and Armstead Butler had 23 bluegills, a warmouth and a yellow perch. Mickey Cleveland had 2 bluegills 15 crappie, 3 bullheads and 2 bass. Tom Porter had 86 bluegills, 1 shellcracker and 1 roach minnow.

fished below the dam on the Jackson River and caught several trout. Glenn used small holographic nymphs and soft hackles. He reported that nothing was happening top-water, no rising fish. “Except for a 14″ rainbow, the other fish I caught were small, 8-inches or so, which included one brown.” His fishing partner also had modest success. The pair fished for nearly 5 hours, and had to work for what they caught.

It was a different story on Buffalo Creek where Busch landed a handsome 18-inch rainbow.

Reports Ed T out of Front Royal: The river was somewhat shallow through the State Park to Karo Landing section; I had to drag the canoe through one little spot. If you come through this section of the South Fork with two up, an ice cooler and your boom box, it will be a bit harder. The grass and algae is getting thicker as summer wears on, so I was constantly cleaning my lures. All things considered, conditions were much better than usual for this time of year. The morning fishing was a little slow. I was using a Mepps #3 spinner and 4″ Senkos in green pumpkin for most of the morning. The bluegills were biting well, mostly on the Mepps. The Senko was attracting most of the smallmouth. I fished the slack water around the rocks, but the flat areas also produced fish. Some of the bluegills were over eight inches. I was getting good size bass as well. Most were ten to twelve inches. Later in the morning, I switched to a Bandit 100 crankbait (silver minnow sparkle). I continued to catch bluegills, even on the crankbait. I caught a couple of bass on the Bandit, but they were mostly interested in the Senkos. Right around eleven-thirty, I caught a nice, eighteen-inch smallmouth with the Senko. It’s been a while since I caught a smallmouth that large, so when I first hooked her, I thought I had a catfish. Imagine my surprise. The bite continued to improve and by one o’clock, it was pretty hot fishing. I switched from the Senkos to 5″ Zoom Super Flukes (green pumpkin) and was occasionally getting topwater bites. I was still getting bass and bluegill with the crankbait and sometimes they would hit it right when it landed. Aggressive! I caught a seventeen-inch bass with a Fluke in about a foot of water right next to a rock ledge. The afternoon fishing was just so nice, some of the better fishing I’ve ever seen in summer. Most of the smallmouth were ten or better, a lot of them twelve, with several thirteens and fourteens. I hardly ever see that kind of size in warm water summer fishing. Numbers? I caught over fifty smallmouth and over twenty bluegills. Late in the afternoon they slowed up on the Bandit, so I switched to a Rebel Wee-Craw (brown) for the last couple of hours. Got some nice fish on the crawdad, especially in the shallow rocky areas. Got some nice big bluegill on the Wee-Craw. But tossing the Senko in the slower, deeper spots netted the bigger smallmouth. One flat, medium deep area just upriver and on the left hand side of the twin islands produced a bunch of good size smallmouth on the Senko. A regular honey hole. Late in the trip I tossed the crankbait near a really small island with a single tree, landed it in a couple of feet of water, and got a fifteen-inch smallmouth about six feet from the canoe. It was that kind of day. Do I want to rave about yesterday? Yes. Indeed. It was hands down the best trip I’ve had this year. No question about that. Before I even hit the water I heard that three guys a few days ago caught almost three hundred smallmouth between them. Darn near everybody has reported very good fishing in the South Fork lately. It’s on, my friends. I won’t even hazard a guess about why the fishing got so good, and I sure as heck won’t complain about it. Guess how many other people I saw fishing this stretch? I saw two teenagers anchored in a jon boat out front of that little housing community. That was it. They were the only people I saw out on the river yesterday. Peaceful doesn’t start to describe the situation. When you have a good day of fishing on a peaceful, quiet river, you can’t help but feel everything is as it should be. Yesterday was such a fine day of fishing. By all means, try to get out to the South Fork of the Shenandoah for some fishing. Good luck with your fishing.

Lots of 3 to 5 pound bass are coming over the gunnel, even as the water temps push into the upper 80’s. Stripers are hitting at daybreak near The Splits and they are coming up again at dusk. Noah Syken, age 8, landed a 24-inch striper. Tourist boat traffic make conditions for anglers most difficult during the day.

Summertime and the Catfish Are Biting

King of the Flats

I am Jim Brewer, Editor of the new CvilleBuzz, a humble on-line attempt to entertain those, not only … END_OF_DOCUMENT_TOKEN_TO_BE_REPLACED