You are here: Home / Outdoor Report / Blues on the Rappahannock 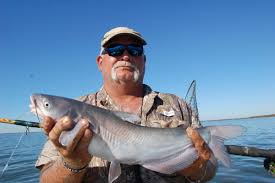 Excellent fishing for blue catfish. Many of the big fish are being caught on cut shad and herring baits, fished on the bottom, in the outside bends of the river channel. Some are over 30 pounds. Fair largemouth bass action in the tidal sections on live bait and plastic grubs. Crappie are available around brush piles in the creeks and on the main river. White perch, yellow perch and stripers are also in the lower river. Above the city, smallmouth bass are taking live minnows and plastic grubs, in the deeper holes.

The water is clear and cold. Catfish action is fair, with some big fish being caught on cut bait. A few largemouth bass are also being caught, no report on smallmouth.

Plenty of anglers were out this week and were catching stripers at Dike Three on bucktails and Sassy Shads. Catfish are biting well, with some 10-12 pounders being taken. The water temperature throughout the lake is in the high 40s and shows signs of warming  later this week.

Anglers at Walkers Dam are taking perch and crappie on small shad darts, gold spoons and bits of nightcrawlers. Live minnows are producing perch, crappie and a few bass. The mouths of the feeder creeks are still producing good numbers of yellow perch and bass, with an occasional catfish. Minnows are the best choice for bait. Pickerel are also active.

A couple of large bass were reported this past week from Briery Creek Lake. A number of fish in the 5-6 pound class were also caught and released. Crappie and pickerel action is good.

Water temperatures are in the mid-high 40s, and fishing is fair. Bass are being caught in the back ends of the creeks on jigs, grubs and large, slow-rolled spinnerbaits. Crappie fishing is excellent, while stripers are biting well at the mouth of Pea Hill Creek. Striper action is still good in Roanoke Rapids Reservoir, below the Gaston Dam.

Some good bass are being taken on points. Crappie fishing is excellent over brush piles and in shallows. Slow trolling with small minnows in the back ends of coves is producing well. Striper action is slowing, but fish are still being caught off major creek points on cut shad, in 8-15 feet of water.

Good catches of stripers prevail, with most in the 8-14 pound class. Smallmouth bass action is good with most of the fish being taken on live shad, minnows and jig ‘n pigs. Trout action has been good in the Smith River, with large, dark, weighted nymphs, big Adams and blue-winged olives.

Still cold and trout fishing is hit or miss. Smallmouth anglers are catching a few fish on Silver Buddies.

Mild and dry weather last week cleared and warmed the water. Fish are moving away from drops and to warmed hard cover surfaces. Also warm water discharges are influencing nearby areas.

Cast Silver Buddy half-ounce lures on 10-pound Edge on a Quantum Vapor PT reel to shallow parts of drops and slowly work down. Short burps and semi slack falls to the bottom; be ready to set the hook. A medium action 7’ graphite rod can set the hook with the faster Vapor reel to load the rod. The softer rod will help tire the fish.

Lake mid-day water  temperatures were in the low to mid 50’s in the main lake and slightly  higher in the major creeks. The lake level was  about even with the top of the dam after falling over the last several days.

I am Jim Brewer, Editor of the new CvilleBuzz, a humble on-line attempt to entertain those, not only … END_OF_DOCUMENT_TOKEN_TO_BE_REPLACED