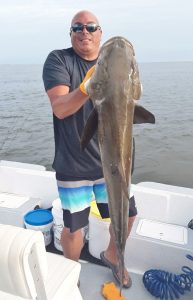 Cobia have begun their migration out of the Chesapeake Bay and some big boys have already found their way down to Nags Head.  Capt. Reese Stecher and parties are scoring with cobia to 70 pounds and more. The fishing is terrific now, says Reese. “We are catching ribbonfish, lots of false albacore, some sharks and some big red drum in the ocean. Back in the sounds, we are catching limits of speckled trout and puppy drum.”
Contact Capt. Stecher at www.beachbumfishing and take advantage.

Elsewhere on the OBX, surf fishing has been excellent on the northern beaches. Coolers full of big spot are being filled, plus trout, Spanish, pompano and sea mullet – and that’s some good eating!
At Hatteras, surf casters are beaching flounder, Spanish, specks, drum, pompano, croakers and sea mullet. The Little Bridge at Manteo produced bottom fish and specks. The piers were banging the Spanish and bluefish, plus lots of bottom fish. The inshore boats, as did Capt. Stecher, boated ribbonfish, lots of false albacore, some sharks and some big red drum. The Bluewater fleet had nice catches of  blackfin, yellowfin, Mahi, bonita and wahoo. Lots of billfish flags were flying after marlin and sailfish releases.

In Virginia, boats are still catching cobia while red drum continue to roam about the lower Bay and around the shoals of the Eastern Shore barrier islands. Spanish mackerel, bluefish and ribbonfish trolling remains productive. Jesse Thompkins of Suffolk landed a huge 7-2 Spanish. September is typically peak king mackerel season off Virginia Beach. A number of smoker kings have already been landed, having crashed into both live and trolled baits.
Flounder catches are improving around the CBBT pilons, near the rocks that cover the tunnels and around coastal reefs and wrecks. Many are caught around the jetties at Rudee and Little Creek inlets.
As the summer gives way to more temperate breezes and cooler days, folks of all ages anticipate the big run of the tastiest panfish on the Eastern seaboard, Norfolk spot. Schools of exceptionally large yellowbellies will provide non-stop bottom fishing at its finest. Virginia Beach pier anglers look forward to lots of spot, some croaker, sea mullet, ribbonfish, sand perch and flounder this time of year.
Offshore anglers are finding plenty of dolphin. The white marlin bite has been consistent with a few blue marlin and sailfish mixed in. The boats deep dropping are catching mostly tilefish and sea bass. David Wright, captain of the High Hopes put his crew on dolphin, then topped off the trip with a sailfish release.

The rivers? Are you kidding? Five inches and more of rain early this week put a damper on smallmouth fishing in the James, New and Shenandoah rivers. Buggs Island Lake is high again, at about 301 feet. Topwater baits, though, are producing some nice bass catches. At Lake Anna, bass are seeking out clear water. Early mornings are producing some nice stripers with live bait the best choice.

The Chickahominy River is maybe the best freshwater fishery in the state at this time. Bass fishing is excellent and catfishermen are filling coolers. Crappie fishing is also on the upswing. Boat docks on the larger lakes have been hotspots for some nice “silvers”.

The trout streams are now full and. fishing for native brookies is excellent. The Game Department will soon begin its fall stocking schedule.

I am Jim Brewer, Editor of the new CvilleBuzz, a humble on-line attempt to entertain those, not only … END_OF_DOCUMENT_TOKEN_TO_BE_REPLACED