You are here: Home / Outdoor Report / A South River Rainbow 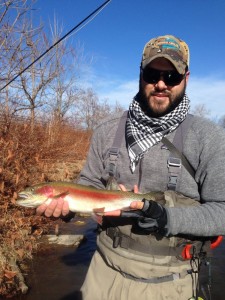 Kevin Little at South River Fly Shop says the South River in Waynesboro is in ideal shape, full of fish and some very nice trout are coming to nets. The South will have been stocked three times this year by the state, with fish averaging 9- to 12-inches. There have also been three private stockings of larger fish, 14- to 20-inches. Plus there are some huge holdover browns. So the South is a great weekend choice. Kevin said a nice caddis hatch is underway, dark tan insects, in size 14 to 16. The sulphur hatch should kick in shortly.

Fishing continues to be good on the tail waters of the Jackson River. Hatches, though, have been spotty, but some big trout to 22-inches are being caught on nymphs and streamers.

The park streams are also fishing well. It looks like the mountain streams had a very good spawn last fall, which bodes well for brook trout fishing in the next two years.

Quill Gordons are hatching on the park streams along with early black stoneflies. Other good streams to check out are the N. Fork Moormans, Rapidan, Conway and Madison Run.

During the Fly Fishing Festival in Waynesboro this weekend, reps with Thomas & Thomas will be on hand at the South River Fly Shop to showcase their new products – a great chance to touch and feel some of the finest rods on the market.

Kevin also says they have a few remaining spots for their Mountain Fly Fishing retreat on May 1-3 at the Rapidan Camps on the Rapidan River. The three-day event, including food and all costs, is just $400 a person. Call Kevin Little or Tommy Lawhorne at 540-942-5566 for more information.

Finally, some good reports from the James. The water is still high at 7 feet (5 is ideal) and it’s a little murky, but fishable. An angler caught a 5-pound citation smallmouth about 6 miles below Scottsville, the nicest fish reported to date. No reports on catfishing, but the big flatheads should be on the prowl as soon as the water warms and clears.

The striper bite at Lake Anna is underway. Anna Point weighed in a 9-10 “lineside” for Tommy Clough. Fishing with Clough on April 5, Shawn Blankenship pitched in as the team weighed in a nice 6-fish limit, all caught on live bait. Nice crappie pushing 2 pounds continue to hit as they make their move to the shallow spawning grounds. Chris McManus scored with an 8-8 largemouth. Numerous largemouth between 4 and 6 pounds have been reported.

Darrell Kennedy of Angler’s Landing reports that the water is clear with temperatures in the mid 50’s. Largemouth bass are in a pre-spawn stage. The bass are being caught in the 2-6 ft. range. There were six citation bass caught this week – four bass weighing over 6 lbs., two  bass weighing  over 7 lbs.  and one bass caught and released weighing over 10 lbs. The bass are hitting well on jerk baits and soft plastics. Crappie are also in a pre-spawn stage moving shallow. Crappie are biting on small minnows and jigs. A few walleye have been caught with live bait in deep water. No report on catfish.

Mike Johncox at Riverside Camp says his fishermen have been mopping up on yellow perch, nice fish averaging about ¾ pound. Anglers are finding them in relatively shallow water, around 5 feet. The best baits are small shiners. The larger perch have completed their spawn. William Jackson and his brother from the Hampton Roads area landed a pair of 15-pound blue cats, both caught on cut eels. The crappie fishing has been consistently good. Local camper, Mike McGee, is out early, catches a half dozen keepers (his dinner) and then heads for the golf course. Lots of bass are being caught, but nothing huge. Mike said a 3-½ pound largemouth was the biggest he saw this week. Stripers are active and the herring have moved up to the base of the Chickahominy Lake dam.

The crappie have moved to the backs of the creeks, says Bobby Whitlow at Bobcat’s in Clarksville. About half the fish have spawned and the other half will finish in the next two weeks. Whitlow weighed in an 18-inch crappie that tipped the scales at 3.52 – and – she had already dropped her eggs. That fish would have pushed 4 pounds before she spawned. Bass fishing is on fire. Spinnerbaits are hammering the shallow-feeding bass. Stripers are becoming more and more active and are, along with the white perch, going up into the rivers to spawn. Catfishing continues to be excellent at the upper, mouths of the rivers feeding Buggs Island.

VSWFT Committee member, Craig Paige began the certification process for a potential record bluefin tuna that was brought into Rudee Inlet on April 2. The fish had a fork length of 102 inches and weighed in at 576.5 pounds. The current record is 573 pounds. The angler was Robert Smith. Speaking with Craig, he said that so far, everything looks good with the catch. The record application will now go to VSWFT Director, Lewis Gillingham’s office to continue the state record verification process.

Offshore, out of Virginia, it is tilefish. New regulations are on the way for blueline tilefish. For waters off of North Carolina on south, the blueline tilefish fishery has been shut down. Off of Virginia, we are still allowed 7 tilefish (combined species) per person. It is likely, but not certain, that the new federal tilefish regulations for offshore waters from Virginia on north will closely mirror the regulations currently in affect for Virginia’s anglers.

Tautog are being caught on the coastal wrecks and they are starting to be caught on structures inside the bay. Some puppy drum were caught inside of Rudee Inlet this week.

Channel catfish made the local fishing news for Easter Sunday. Several people fishing the Little Bridge on the Nags Head/Manteo Causeway hooked up with some nice catfish. Porter Smith and dad Kerry Smith caught and released three fish in the 2-pound range in less than 20 minutes. They were fishing with menhaden. Luke Kiger also caught a catfish on shrimp on a double rig. Luther Kiger said he had been fishing the little Bridge for 46 years and had never seen a cat caught from the Little Bridge.

The surf fishing bite continues to be good on the south beaches. Blow toads, sea mullet and puppy drum were caught.

Persistently windy conditions and inlet shoaling is making it very difficult, but when boats can get out of the Outer Banks some tuna are being caught. A few wahoo are also in the catches. One boat sailed out of Oregon Inlet on Tuesday came back in with a 67″ bluefin tuna. A private boat went out and returned with a catch of two yellowfin tuna and three Mahi Mahi. Also on Tuesday, the “Bite Me” had a nice catch of chubby blackfin tunas.  Most were citation sized, although they only filled out paperwork for the two biggest at 32- and 26-pounds. Also reported were a couple of dolphin and a Bonita mackerel.

On Sunday, a great report. At last – lots of pups and yearlings caught on both sides of the Point and very few dogfish. Quite a few sea mullet in the one-pound category and blowtoads were reported from Avon Pier and all along the beaches heading south. Puppy drum, sea mullet and blowtoads were caught behind the motels. The forecast ahead looks good and Rutgers shows water temps in the low 60’s all the way to Rodanthe. Danny Joe Willard is still predicting a good big drum bite this week, and Lord knows, he’s never wrong.

Capt. David Wilson had this report on April 6: “My group had an excellent day of tuna fishing on the Bite Me yesterday, and wanted to try something different. I love it when a plan comes together. Limit of golden tiles and a nice snowy, plus a bunch of rosies. No trolling bites although we spent some time looking for that blue marlin. Blackfin fishing was great again today for the guys that tried it.

On April 2:  “I love it when the current slacks off. We made a few deep drops this morning and came up with our limit of golden tiles, a nice snowy grouper and a pile of rosefish. A handful of grey tiles would have been nice but the government says we can’t catch any more of them. We didn’t have any trolling action other than some albacore, but the guys had a nice pile of fish anyway. Tim got the prize today with a 40 pound golden on a jigging rod.

I am Jim Brewer, Editor of the new CvilleBuzz, a humble on-line attempt to entertain those, not only … END_OF_DOCUMENT_TOKEN_TO_BE_REPLACED