You are here: Home / Outdoor Report / A New Season 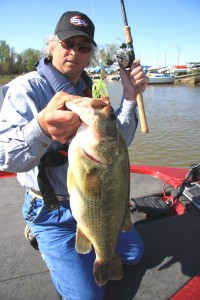 Summer is losing its grip on the Potomac fishery. Grass is breaking up and the water is cooling. Longer, cooler nights will allow water temperatures to slide into the mid 70s.

With cloud cover, spinnerbaits with ¼ ounce Colorado Indiana blades and white skirts on 12-pound GAMMA Edge fluorocarbon line are good choices. Run this lure around grass remnants and snap free from grass. Try to run just out of sight under the surface. Mann’s Baby 1-Minus crankbaits on the same line can be fished the same way. Replace hooks with Mustad KVD triple grip treble hooks.

As the tide comes in, move closer to the shore and pitch soft plastics. Weightless stickworms on 3/0 Mustad Mega Bite hooks and 12-pound test Edge cast be pitched or cast. Allow to drop and watch line for bites. Slight lift and drop back to the boat. Also Texas rigged Mizmo Tubes on the same hook but with a 1/8-ounce bullet weight.  Small Swimbaits with a large 1/8 ounce weighted Mustad swimbait hook with an additional 1/8-ounce pegged bullet weight can be pulled through grass along with swimjigs and same swimbait as a trailer.

Steve Caylor of Fredericksburg paid a visit to Lake Orange and landed a nice 23-inch walleye along with a 15-inch bass. Walleye fishing is hot up-lake, Some saugeyes to 16-inches are being caught, meaning next year there will be keepers. Patient anglers were catching crappie to 11-inches from the pier. Bluegills to one pound were also hitting worms and even small shiners. Anglers fishing at night pounded the crappies each time the shad schools swam by. Water temperatures are around 80 degrees and clear. With the shorter days and cooler temps the fall feed is on. Some nice fish are being caught bass, walleyes, and crappie are in the shallows feeding on bait. Catfish are also cruising the shallows feeding on minnows, livers, and night crawlers.

Anglers Landing will remain open through October. The new hours are Thursday through Sunday from 7AM till 7PM.

The river is low but smallmouth are patrolling the banks near grass beds. Flukes and tubes are taking fish.

Low water is making the smallmouth extra spooky, but long casts and light line will deliver the goods. Catfish are deep throughout the day, but will take cut shad. Late evenings are best.

Floats are becoming increasingly difficult with low water, but smallmouth are biting when you can reach them. Topwater is especially good now. Some anglers are going for carp, and some on fly rods.

Sunfish are all over the river.

Bass are making their move to shallow water for the fall feed. A recent morning tournament produced 13.12 pounds for the winning team out of Anna Point.

Crappie are still deep. The stripers are busting bait at first light.

Excellent fishing on the James from above Lynchburg down to Columbia. Some big smallmouth are taking topwater offerings as well as Flukes and Senkos.

Bass action remains strong, especially on falling tides and in areas such as pad fields and along cypress roots. Small crankbaits work well. Catfish from 2 to 20 pounds are active. Some nice bluegills have been reported.

Bass are certainly not back behind the bushes, because that’s dry land. The water level is 298. Bass are working their way back into creeks and crappie are moving shallow. Some big flatheads are taking cut shad. Stripers are hit and miss, but the Bluestone area has been best.

Bass have moved right up on the shore, chasing exposed baitfish with the low water. Strips are biting in low light conditions. Crappie are moving in on brush in 6 to 12 feet of water. Pan-size cats are active at dusk,

Not much happening except the valley spring creeks and the Jackson below Gathright. Brookie streams are way low.

The Cobia are Here!

I am Jim Brewer, Editor of the new CvilleBuzz, a humble on-line attempt to entertain those, not only … END_OF_DOCUMENT_TOKEN_TO_BE_REPLACED