You are here: Home / Outdoor Report / A Monster 64-pounder 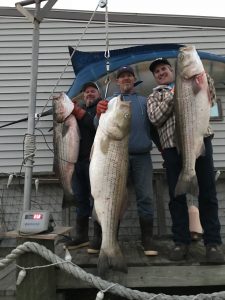 They’re here all right – big stripers. A 64-pounder was brought to scales last week and numerous fish in the 50-pound class are showing as well in the lower Bay. Chris Bait & Tackle at Kiptopeke says that most fish are being caught in the Buoy 52-54 area with others fishing towards Tangier.

“We have had a few fish off Cape Charles, as well.” Chris said. The fish are scattered but there are some nice ones out there and there are just two weeks remaining in the bay season.

No reports on Tuesday and Wednesday, too cold, but Monday was a good day for Outer Banks anglers. Jennette’s Pier produced trout and dogfish. Stripers were working under the birds back in the sound.

It’s been mostly a no-go for offshore boats, Some King mackerel were reported out of Hatters on Monday.

The Rappahannock above Fredericksburg is giving up some nice smallmouth in deeper pools. Catfish are active below town. The upper James is slow with water temps in the upper 40’s, but a few big smallmouth are hitting. Below Richmond, the river is giving up some bragging size blue catfish in the Dutch Gap area. The Chickahominy River is producing nice catches of crappie and yellow perch. Pan size catfish are there for the taking. Not much action on the New River. A few musky diehards are out and about with some catches.

Water temperature is around 40.

If you venture out, wear a PFD! Dress appropriately! And leave a float plan with someone who cares about you. Fishing will be decent, but fishing must be slow and deliberate. However, in warm water discharge areas, Blue Plains, Four Mile Run, and Possum Point, suspending Lucky Craft Pointer 78 jerkbaits on 10 pound test Gamma Edge fluorocarbon line will work. Make long casts and work natural colored baits. Topwaters aren’t out of the question if fished slowly.

For the rest of the river, use Silver Buddy blade baits. The 1/2-ounce silver when sunny and the gold when cloudy will work down drops. Choose out of the current areas, close to deep water. Make casts to 3-foot depths and allow the bait to hit bottom. Slight raises of the tip to burp the bait and then allow to drop on semi slack 10-pound test Edge line. Quantum’s new Vapor bait cast reel is fast enough and has a smooth drag. Pair it with a medium action Quantum KVD cranking rod. Work the bait down the drop and take note of what depth bites occur. Focus on these depths.

It’s walleye time at Anna. Dike 3 has been productive. Lots of striper fishermen are out and about with some catches coming on top water lures. Bass are in a full winter pattern, meaning deep and crappie are deeper.

There are ideal conditions now on all Virginia trout streams. Cold water has slowed the bite, but there are fish to be caught by patient anglers.

Return of the Big Greys

I am Jim Brewer, Editor of the new CvilleBuzz, a humble on-line attempt to entertain those, not only … END_OF_DOCUMENT_TOKEN_TO_BE_REPLACED