You are here: Home / On Golden Pond / Pond Update 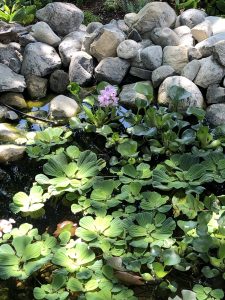 What would an issue of CvilleBuzz be without an update on the pond in our backyard? That would be like the NY Times omitting its Op Ed page. But to tell you the truth, I don’t know what we would have done for entertainment for the past few months were it not for our fascinating goldfish pond beside our patio. Afterall, you can’t go to the movies or plays or concerts. Fortunately, our little Golden Pond has kept us thoroughly entertained. There is always something going on.

As regular readers are aware, once we put our 8 fairly large goldfish in their new home, they almost immediately had babies. At first, we only saw two or three and they were silver-ish.  Now, we have about a dozen small goldfish, but most aren’t gold. We have only one pure gold minnow, and we call her Goldilocks. She swims with the big boys (now about 6 or 7-inches) at feeding time. There is another goldfish with a black spot on his back. We call him (ta da) Black Spot. There is also one somewhere between. White and orange. We call her Pinkie and there is a third multi-colored goldfish. He’s mostly black on top with gold markings on his sides. We call him Multi-Tasking.

The others are either jet black or dark gray, but the strange thing is that not one of the adult goldfish has even a whisper of  black on them. I suppose it just runs somewhere in their genes – some are gold, some are black and some mixed. I don’t have a clue what color the gray goldfish will eventually become. I suppose they haven’t decided yet and are keeping their options open.

So now instead of 8 goldfish, we have about 20 and summer’s not over. I read that goldfish can breed once monthly through the end of August. So there could be more on the way.

We also have three baby bullfrogs. We put a dozen tadpoles in the pond soon after we built it, but I think a raccoon may have reduced the tadpole population with a midnight raid. He certainly stirred up the pond, tipping over water plant pots and creating havoc. If he came across a tadpole, I’m sure he invited it to dinner. But three frogs is about right for our small pond – it’s about 4 x 10 overall. I was concerned at first that the frogs might not have enough to eat, but a couple days ago I saw one zap a small bug in midair and there are lots of bugs hovering or crawling near the pond.

Bottom line: The water plants are prospering, the fish are multiplying and the frogs are catching bugs.

As Walter Cronkite would say, “And that’s the way it is.”

I am Jim Brewer, Editor of the new CvilleBuzz, a humble on-line attempt to entertain those, not only … END_OF_DOCUMENT_TOKEN_TO_BE_REPLACED