You are here: Home / On Golden Pond / Now We Have Black Goldfish 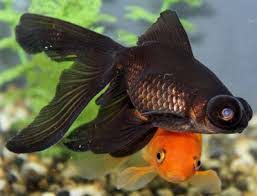 I always thought goldfish were, well, gold. But since we installed our small goldfish pond, I have discovered that goldfish can come in a variety of colors – white, gold, mixed white and gold and even black colors. Our 8 original goldfish (now down to 7, the funeral service was last week) have started to reproduce in their new pond. A couple weeks back, Nancy saw several tiny, white fish, probably Whitey’s young ‘uns, but then a few days ago, we started seeing small black minnows. They’ve got to be goldfish, there are no other fish in the pond. One of our fish obviously has some of those black genes, though none have even the slightest of black markings.

My research indicates that goldfish can begin to reproduce as early as two years of age. I also discovered  that the females can spawn once a month, from April through August, laying as many as 1,000 eggs. Most of the baby goldfish are eaten by the adult goldfish, and tadpoles can also catch and eat the small minnows, but as best I can tell, we have at least 4 tiny, black goldfish minnows, maybe more.

There is a strain of goldfish called Black Moors and I’m wondering if these are what we have. Black Moors are also known as “telescope fish”, because of their bulging eyes. It’s too early to tell if we have Black Moors, but they are definitely jet black.

I am now thinking about going into the Goldfish Breeding Business. This way I can write off the entire cost of our pond, plus maintenance and upkeep. I’m sure the IRS will understand, don’t you think?

If You Build It

I am Jim Brewer, Editor of the new CvilleBuzz, a humble on-line attempt to entertain those, not only … END_OF_DOCUMENT_TOKEN_TO_BE_REPLACED