You are here: Home / On Golden Pond / Frogs in the Pond 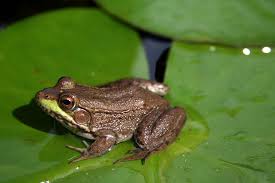 I put a dozen tadpoles in our little goldfish pond about eight weeks ago, hoping at least one would make it to frog-dom. One did, and there’s another tadpole soon to become a frog. There may be more, but we have so many water hyacinths, it’s hard to tell

Truth be known, I wanted a frog pond all along. The goldfish just gave me an excuse. For the past several years,  we had frogs in Nancy’s small lily pond, but by the end of the summer, they went away. I understand that when cold weather approaches, frogs truly hibernate. They crawl under rocks or debris, crank their metabolisms down to zero and veg’ out for the winter months.

I am praying that will happen to Uh-huh III and Uh-huh IV. Those are their names, Uh-Huh, as in “Froggie went ‘a courting and he did ride, Uh-Huh, Uh-Huh”. My grandmother used to sing me that song when I was a boy, and some things you never forget.

It’s fascinating watching my little bull frog as he peaks his eyes just out of the water and scours the horizon for wayward mosquitos and gnats. And woe be to any cricket who decides to get a sip of water. Frogs are big-time carnivores and will eat anything that can fit in their wide mouths –  insects, worms, small rodents, minnows, tadpoles, fish eggs and even small birds. It will be a while before either Uh-Huh will be big enough to eat birds, but I hope they do stick around for several years.

I am Jim Brewer, Editor of the new CvilleBuzz, a humble on-line attempt to entertain those, not only … END_OF_DOCUMENT_TOKEN_TO_BE_REPLACED