You are here: Home / On Golden Pond / Fish From Heaven? 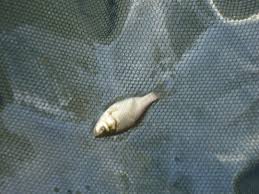 Our goldfish pond continues to amaze. Last week, Nancy said she saw some tiny minnows swimming in the pond. I suggested that maybe they were her little imaginary friends, like Harvey the Rabbit.  She gave me one of those looks that said, “You are treading on thin ice, buster.”

And I said no more.

But tiny minnows in our pond? Where did they come from, heaven?

Then she called me over. There were two minnows swimming that I could see. They were whitish and maybe  ½- inch long. She caught one in her net and I feel confident it was a baby goldfish. Big Mama, the name I have given our largest goldfish, had come through. I noticed several weeks back that she had a bulging tummy and Whitey and White Lips were bumping into her sides. That’s how goldfish do it.

The female first releases pheromones which trigger the males to produce silt. The males then pursue relentlessly, bumping into the female until she discharges her eggs, which are quickly fertilized. Females can lay up to a 1,000 eggs, but only a small percentage survive. The goldfish themselves eat most of them.

I read that goldfish can reproduce as early as two years of age, but three or more is best. Our goldfish are probably five years old, so they are definitely of age. Then I read (gulp) that they can spawn once a month from April through August.

We are likely to have more than one female among the bunch. What if all their babies survive and instead of 8 goldfish, we have 80? No way that Nancy will want to give any up for adoption.

I am Jim Brewer, Editor of the new CvilleBuzz, a humble on-line attempt to entertain those, not only … END_OF_DOCUMENT_TOKEN_TO_BE_REPLACED