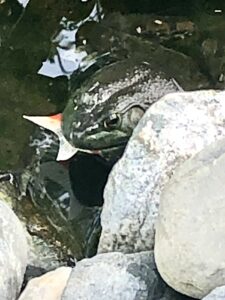 I remember my first fish. It was a stubby little bluegill caught in a farm pond near my hometown of Raleigh. My resident bullfrog, Billy Bull, also caught his first fish and it may have been bigger than my first bluegill.

I was feeding Billy some meal worms on a recent afternoon during cocktail hour. He had seen me sit down and moseyed his way over, knowing there were snacks at hand. He was right at the edge of our small pond and picking off worms that came his way, but occasionally, one of the goldfish would squeeze in front of him and gobble up the worm. Billy snapped at the intruder once, but the fish returned. The next time it darted between Billy and the mealworm, Billy grabbed the goldfish and swallowed it headfirst.

This was not a small goldfish, either. It was at least 4-inches overall, with a fat body. He would be classified as a jumbo minnow in a bait shop, but Billy ate him anyway.

At first, I was more worried about Billy than the fish, that our frog might get choked, and I made an attempt to grab the fish’s tail, but my now-stuffed frog slithered away. At first you could see about half the fish’s torso, then gradually as Billy opened his gullet, the fish went down the chute. Within about twenty minutes, the fish was no more. After that, I didn’t bother to toss any mealies Billy’s way. I figured he was full.

We have 8 goldfish remaining in the pond, and they would each be wise not to try to steal any meal worms from Billy Bullfrog.

I am Jim Brewer, Editor of the new CvilleBuzz, a humble on-line attempt to entertain those, not only … END_OF_DOCUMENT_TOKEN_TO_BE_REPLACED