You are here: Home / On Golden Pond / A Nighttime Visitor 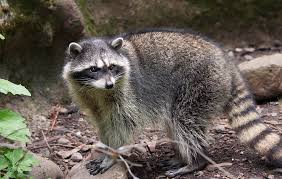 We’ve had a nighttime visitor in our little goldfish pond. The reason we know is that our after-hours “guest” has turned several water plant pots in the pond over during his visits. We also found one of our big snails laying upside down beside the pond the next morning. But he was fine when we tossed him back in the water. I have to suppose that our pond invader is and was a raccoon.

When we saw the tell-tale evidence of the aquatic raid, I first worried that something may have been after our goldfish, but all 8 were present and accounted for. Maybe it wanted the tadpoles? But they all seem to be fine and dandy.

If it was a raccoon, I suppose he may have been looking for mussels or fresh-water clams. I know they love those and will fetch them from shallow water in lakes and streams. He may have thought the snail was a delicacy, but couldn’t figure out how to get inside.

We thought about stringing a net across the pond, but I suggested a healthy sprinkling of Repels-All, and that did the job. No more turned over pots and displaced plants – so far.

I am thankful it wasn’t an otter – perhaps the greatest fishing mammal of all. They can decimate a large farm pond, much less a goldfish or koi pond. The raccoon, apparently, is not quite as good of a fishermen. He should stick to trash cans.

Now We Have Black Goldfish

If You Build It

I am Jim Brewer, Editor of the new CvilleBuzz, a humble on-line attempt to entertain those, not only … END_OF_DOCUMENT_TOKEN_TO_BE_REPLACED