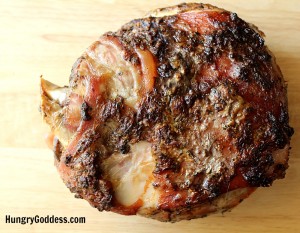 On a trip to the grocery store last week, I had in mind a Boston Butt pork roast, cooked all day at a low oven setting. My fellow foodie, Terry Tigner, wrote about that method of cooking in one of my first CvilleBuzz issues last winter.

I saw a decent Boston Butt (which isn’t a butt at all, but rather a pork shoulder) but right beside it was a fresh picnic ham that had just been reduced.

When I was a boy, a fresh picnic was a staple in our house. Mom or Daddy would often put the ham in the oven before we went to church and the house smelled delightful when we arrived back after the Sunday Service. Seeing that ham stirred old memories. It was a small ham but it had been marked down to just under five bucks. At $5, how can you go wrong? So I bought it and decided to cook it exactly as I would a Boston Butt. Nothing fancy, I simply salted and peppered the ham (thoroughly), let it rest for an hour before I wrapped it in foil and put it in a 235 oven to cook all day. The last hour, I opened the foil, drained the excess juices and turned up the oven to 275 to get the skin crispy. The end result was delicious. In my opinion, a picnic ham is a superior cut to a pork shoulder.

Most barbeque and slow cooked pork these days comes from shoulders. They are generally less expensive cuts and make great barbeque, but in my home state of North Carolina, a whole hog is the way to make barbeque and whole hog means hams in addition to shoulders – the whole enchilada.

Next time you have a longing for some slow cooked pork, check out the fresh hams and give one a try. The barbeque sandwiches from the leftovers, by the way, are superb.

Wrap in foil and cook all day at 235. The last hour, open the foil, drain the excess juices and brown in a 275 oven. Let rest 30 minutes before serving and rather than slicing, separate the meat like you would at a Pig Pickin.

“As Seen On TV” Brownies

I am Jim Brewer, Editor of the new CvilleBuzz, a humble on-line attempt to entertain those, not only … END_OF_DOCUMENT_TOKEN_TO_BE_REPLACED