You are here: Home / Now We're Cooking / Some Like it Hot 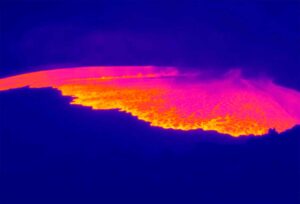 On the day our Delta flight touched down in Hawaii, Mona Loa, the world’s largest active volcano, erupted after a 38-year sabbatical. A series of earthquakes had triggered an explosion of molten lava from the center of the earth. Someone had crossed paths with Pele.

Pele, the Hawaiian goddess of volcanoes and fire, is said to have the sole power to create life through destruction. Only she knows when and where a volcano may erupt. But when lava flows, it adds new ground and new life to the volcanic Hawaiian Islands. There are now nearly 1,000 acres of new land mass off the Big Island following the eruption of Kilauea in 2018.

Pele, they say, considers each lava rock to be one of her children, and woe to anyone who illegally snatches a chunk and takes it home.

Stories of sickness and divorce, of cars breaking down and dogs running away, of all sorts of bad luck have surfaced from those who may have kidnapped even one of Pele’s offspring.

The National Park Service says – and this is factual – that they get thousands of packages of returned lava each year, as the thieves beg Pele for forgiveness and relief from their ill fortunes.

Nancy and I weren’t in need of the Goddesses’ grace, we had left her lava alone in previous trips, but we were concerned with her hair.

The spewing lava – not currently a threat to homes – poses an airborne risk. As the ascending lava bubbles explode when the clash with cooler air, they send delicate, golden strands of molten lava resembling human hair blowing downwind. They call those strands Pele’s hair, and they are as sharp as tiny shards of glass.

Fortunately, the winds were blowing far enough from civilization to pose a threat.

On Tuesday, Nancy and I had ascended to the rim of Kilauea and gazed into the depths of her destruction. Though that volcano is now dormant, massive clouds of steam still spew from the earth through many fissures. It gives you a startling dose of respect for the power of our earth and the total helplessness of humans in its path.

Later that evening as our ship worked its way from Hilo to Kona, we were able to see the new recent volcanic evidence of Mauna Loa. The sky to the northwest was glowing red, like hot embers in a firepit. It was both surreal, and beautiful. The following morning brought clouds of smoke down the mountain to engulf the port city of Kona. Pele’s hair, however, did not make the trip.

I am Jim Brewer, Editor of the new CvilleBuzz, a humble on-line attempt to entertain those, not only … END_OF_DOCUMENT_TOKEN_TO_BE_REPLACED