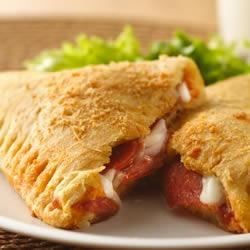 Pepperoni Rolls are a unique West Virginia creation, inspired from the lunch pails of coal miners. Relegated to the depths of the mines, a Pepperoni Roll for lunch was a welcomed respite for a hungry miner.

First created in Marion County in the 1920s, the classic Pepperoni Roll consists of a soft white yeast bread roll with pepperoni baked in the middle. Since the pepperoni was cured, it did not require refrigeration and was perfect for a miner’s lunch.

My sister-in-law, Laura Patterson from Charleston, makes the best-ever pepperoni rolls.  She gave me her recipe, but yeast and I don’t get along well. Yeast has its rules and I have mine. It rises or falls at its own will, ignoring the pleas of yours truly.

Last week, though, I found myself with some spare pepperoni in the fridge along with several cans of crescent rolls I had hoarded for the food shortage that never came. I decided to make some pepperoni pockets – a far cry from Laura’s yeast rolls, but they tasted pretty good.

It was easy, actually, and here’s how.

Pop open a couple cans of crescent rolls. There are 8 rolls in a can, but separate into four squares by pinching two rolls together. Put 4 slices of pepperoni in each square, then a half slice of mozzarella cheese. Sprinkle a bit of Italian seasoning on the cheese, fold the roll into one piece, pinch the sides closed and bake in a 375 oven for about 12 minutes, or until golden brown. They’re good hot or cold and I suppose you could put them in a miner’s lunch pail if you had one.

4 slices of mozzarella (Cut in half)

I am Jim Brewer, Editor of the new CvilleBuzz, a humble on-line attempt to entertain those, not only … END_OF_DOCUMENT_TOKEN_TO_BE_REPLACED