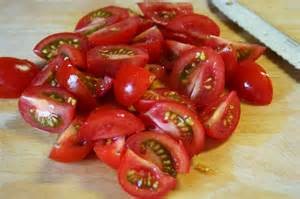 As I mentioned in last week’s Cooking column, I had five volunteer tomato vines that I let grow in my garden that have since produced enough tomatoes to cause a drop in the prices of all Mexican imports. I exaggerate, of course, I often do, but we have no shortage of small tomatoes in the Brewer household, and that’s no lie. Each day, I harvest a bumper crop. When we have salads, I put a dozen cherry tomatoes in each bowl and we eat whole cherry tomatoes along with almost every meal. I even tried them in a bowl of Corn Flakes, but I think I’d rather have fresh peaches.

Still, I am always looking for new and exciting ways to get rid of my Lilliputian tomatoes and last night I tried a new dish that will help eliminate some of my crop surplus. I had purchased some young yellow squash, so I decided to mix the tomatoes and squash with a Vidalia onion and it worked out well. Again, an easy, simple recipe, but good.

Salt and pepper to taste

Here’s what I did.

I cut up three yellow squash into one-inch chunks (I’m sure zucchini would have worked just as well.) I also sliced up half of a large Vidalia onion. I put both in a Pyrex dish with a tablespoon of water and a tablespoon of butter, plus salt and pepper, and zapped them in a microwave for five minutes. Next, I added about 16 cherry tomatoes, sliced in half, to the mixture along with a half cup shredded mozzarella cheese, a quarter cup shredded parmesan cheese and a teaspoon of dried Italian seasoning. I mixed all the ingredients, spread a ¼ cup of Panko crumbs and two tablespoons of dotted butter on top, covered the dish and put them in a 350 oven. After 15 minutes, I removed the cover and baked another 15 minutes to brown the butter and crumbs. The squash, onion and cherry tomato concoction was very good. Now what to do with the bushel of cherry tomatoes that grew last night!

Crockpots and the Frugal Chef

I am Jim Brewer, Editor of the new CvilleBuzz, a humble on-line attempt to entertain those, not only … END_OF_DOCUMENT_TOKEN_TO_BE_REPLACED