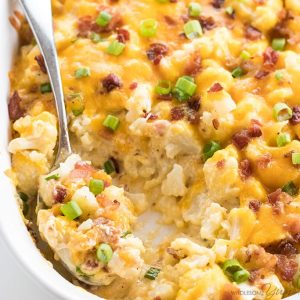 Cauliflower is one of those foods that you know you ought to eat more of, except it is basically tasteless. Compared to a baked potato, it has practically zero calories, but also zero taste.

Recently, I was hell-bent on having cauliflower instead of a potato, but I decided to load it up – like I would a potato. Bottom line? Though it wasn’t quite as tasty as a loaded baked potato, with what I put on it, it was pretty good.

For starters, I bought a fresh cauliflower and cut it into small florets. In a separate bowl, I put a ½ cup of whipped cream cheese, 2 T butter, two finely diced green onions and two crumbled slices of bacon and mixed thoroughly.  I boiled the cauliflower in salted water for about 15 minutes, until tender, then drained in a colander and then  added the florets to the cheese mix, coated them thoroughly and served. You almost didn’t know you weren’t eating a loaded baked potato.

I am Jim Brewer, Editor of the new CvilleBuzz, a humble on-line attempt to entertain those, not only … END_OF_DOCUMENT_TOKEN_TO_BE_REPLACED