You are here: Home / Now We're Cooking / Tautog Bite is On 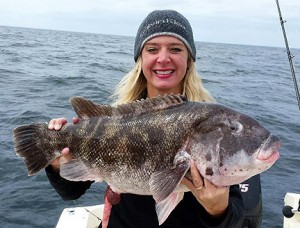 We endured yet another harsh winter, and now spring fever is rampant. But with water temperatures still lagging in the low forties, expect a late start to the much-anticipated arrival of the first species of the season, the croaker, flounder, bluefish, red drum and black drum.

Tautog fishing is still pretty much the only game in town until the waters warm. But the bay action will remain behind the curve with the chilly temperatures, and the coastal and offshore action is slow. Although a few die-hard ‘tog anglers have tried their luck on various offshore wrecks, only a few fish have resulted from their efforts. Scattered fish pushing up to 15-pounds have made it back to the dock, with one boat reporting a catch of two keeper tog resulting from an all day trip this week. Sea bass are also still hitting on these same wrecks, but anglers must throw them back since the season is closed.

Speckled trout and puppy drum, often an alternative species for this time of year, is a no-go for the few anglers still trying their luck.

As we anxiously await our chance to finally get in on some decent fishing opportunities with warmer weather, our fisheries management representatives are at work changing regulations, guidelines and limits. Don’t expect great news on this level, as the recent announcement involving more restrictive striped bass regulations will only add to your frustration. New for the 2015 striped bass season, in the Bay the minimum size of fish you can keep has increased from 18- to 20-inches, and for the spring trophy season, the minimum size has increased from 32 to 36-inche. But, wait for it, now you also have the honor of having to obtain a permit to do this. The coastal guidelines still allow for only a single fish at 28-inches. So, be sure to review the regulations before you fish for rockfish in the 2015 season. The good news is you can now fish for sea bass four days earlier, on May 15th, and your fishing license fee was rolled back by a whopping five bucks starting in April. Just be happy remembering that spring is here, and just hope to catch a fish you can actually legally target and keep. But hey, at least you saved five bucks.

The deep dropping interest off the Virginia coast is still good. When the weather allows, boats continue to catch an assortment of bottom dwellers, including blueline tilefish, golden tilefish, black bellied rosefish, and a variety of grouper. The dogfish are still out in force, making this activity a challenge, especially when cranking these pests up from around 400 to 800 feet down, where electric reels could be the answer.

Bluefin tuna are still the main interest for offshore boats off Carolina, with some decent yellowfin and some blackfin tuna also in the mix. Several bluefin continue to push to over 200-pounds. This action should continue to move closer into range for the Virginia fleet over the next weeks.

Zero, zilch, nada! Way too cold. The croaker bite could be delayed as much as two or three weeks.

It was a beautiful day on the Outer Banks on Tuesday, March 31. TW’s Tackle reports the wind SW at 6. The water was flat and glassy and the water temperatures crept to 46 degrees on Tuesday afternoon.

Ramps 49 and 55 had a few drum yesterday. There was a 48-inch drum caught at the Cape over the weekend. No news from the Nags Head side of the bridge.

On Monday, March 30, the fishing was fair south of us despite the very cold weather. Ramp 49 reported puppy drum and blow toads caught with shrimp. Dog sharks went for finger mullet. Also on the south beaches, bloodworms and shrimp were catching sea mullet.

Red Drum reported a late afternoon Puppy Drum bite at Ramp 55. The weather and wind did not help fishing today.

It was pretty cold On Sunday morning, but it turned out to be a good day. Blowtoads and sea mullet were caught on the south beaches with bloodworms and shrimp. Puppy drum hit again in the holes off Ramp 49 and there were a few in the mid 30’s. A couple pups were reported off the Point and fewer dogfish. No reports from inshore or offshore boats.

There were good catches of puppy drum off Ramp 49 on Saturday morning and a few slots reported being caught south of the Point. Preferred baits are shrimp and cut bunker. A rumor – just a rumor – that some bluefish were caught at the south end of Ocracoke. There were plenty of dogfish at the Point in the afternoon.

Capt. Dave Wilson aboard Godspeed Charters set sail on March 29, despite a 25-knot breeze. Fortunately, there was a trickle of down current, which made the sea conditions tolerable. Says Capt. Dave:

I spent most of the morning out over the hundred, hoping that a pack of yellowfins would find me, but they never did. One of the other guys started picking at the blackfins back inshore, so I trolled in and joined them. We had lots of action and between the blackfins and fat alberts, and the guys stayed busy all afternoon.

Tom Reisdorf at Angler’s Lane in Forest says the brook trout fishing is on fire on Piney Creek. Quill Gordons and some March Browns are coming off. Tom said the Jackson below Gathright is also productive for large trout up to 19-inches. Currently, big streamers are the ticket.

Tom also noted that a hot selling product is the new Sage One series. The 10’, 4-weight, Tom says, is a super nymph rod. The Sage One rods are stiff, yet have very soft tops and are a pleasure to cast.

The crappie bite is on as warming weather brings the schools into shallow water. Many fish are being caught at the backs of coves. Some 2-3 pound fish have been reported.

Bass fishing is fantastic as big females move into the spawning grounds. Most fish are in 4-feet or less. Crankbaits and jerk baits are producing nice catches. Still no word on stripers. Some nice blue cats are being caught uplake.

The James is high, but fishable, yet still very cold. No word yet on the Staunton River which produces nice stripers on the spawning run from Buggs Island Lake.

It’s bass time at Lake Orange. Darryl Kennedy fished for a few hours and picked up 10 nice bass, averaging 3 pounds with a big fish kicker at 4 ½ pounds. Darryl was throwing jerk baits. Jamison Powell landed a 7-pound largemouth. One crappie angler returned to the dock with 7 fat speckles. Kennedy says most crappie are staging in 8 feet, preparing to attack the shoreline and spawn. No report so far on catfish or walleye.

Capt. Art Conway of Conway’s River Rat Guide Service (804-746-2475) out of Ed Allen’s Boats and Bait reported that Chickahominy Lake mid-day water temperatures were in the low 50’s in the main lake and the mid to high 50’s in the major creeks on Wednesday. The lake level was a few inches above the top of the dam. The water was light to moderately brown and slightly cloudy in the lower lake.

The water is still cold at Lake Anna, running from 49 to 53 at midlake up to 50 to 54 uplake. As a result, crappies are still mostly suspended in deep water and bridge pilings. A few more upticks in the water temperature will bring them close to sure. Dr. Greg south landed one of the best crappies of the spring so far, a 1-11 ounce beauty.

Bass are already making their shoreline moves. Look for them on the first break line off the shore in 4 to 10 feet. Angler J.V. Skinner weighed in a big 6-4 female bass. Her tail was blood red from the rigors of the spawn. Stripers are now beginning their spawning journey uplake. The best spots to try include the mouth of Duck in Hole and Goldmine Creeks on the North Anna side and from the S-Turns up to Little Florida on the Pamunkey Arm.

James River/Scottsville. Heavy rains late last week made the James unfishable again, and it’s still cold. The smallmouth will begin to spawn in May, if the elements allow.

On March 26, the Shenandoah was cold, at 44 degrees, but clear. Front Royal Landing reports nice action for anglers while fishing from their landing on Thursday afternoon. One angler was using spinners and getting nice bites and landing some smallmouths of various lengths, but mostly small. After about 40 minutes of trying different spinners, he tied on a 1/16-oz. Worden’s Rooster Tail, single golden blade with tan hair and almost immediately landed a nice 13″ smallmouth. He kept throwing that lure for a while with limited bite action. Changing again to a 1/8-oz. Worden’s Sonic Rooster Tail, single golden blade with white hair. After a few casts he landed a nice 12-inch smallie.

Fishing is just starting to pop and once warmer days start to run together we will see some real nice action on the river. Ed T will be on the river soon so we can all look forward to his weekly reports.

I am Jim Brewer, Editor of the new CvilleBuzz, a humble on-line attempt to entertain those, not only … END_OF_DOCUMENT_TOKEN_TO_BE_REPLACED