You are here: Home / Now We're Cooking / How To Barbeque Chicken 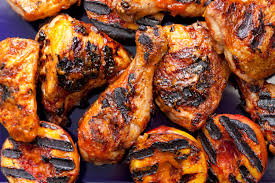 I have been barbequing chicken on the grill to various degrees of edibility for over 50 years. It is one of the first things I learned – or attempted to learn – to cook. Some of it has been really good, while some of it turned out more like chicken flavored briquettes. I have finally learned – I think – how to cook great barbeque chicken every time.

I have found that if you’re cooking on the grill and are in a rush to get dinner on or to serve company by a reasonable hour – don’t cook chicken. Cook steaks or chops or something that does not take time. This is especially true with a gas grill.

The old Weber charcoal grills were much more forgiving in that you could close the damper and quickly extinguish a Smokey The Bear-type fire on your grill. The problem with chicken – you see – is that has an immense amount of fat in its initial stages and fire and fat don’t see eye to eye. The fire almost always wins. The chicken explodes into flames if you cook too fast and too hot. By closing down the damper on a Weber, you deprive the fire of much needed oxygen and it simply sits there and sulks, and makes your chicken taste like concentrated smoke.

Gas grills don’t have those dampers with which to bail you out of trouble. A five-stage fire on the grill ends up in ordering a pizza for dinner.

However, if you cook slowly – like on the lowest settings until the fat has dripped off without becoming an inferno – you have a fighting chance.

Also, when cooking chicken on a grill, you don’t have the luxury of going inside to check on a simmering pot of lima beans, because the grill knows when you’re not paying attention and that’s when it turns on the afterburners.

So make yourself a big cocktail at the outset, watch the grill and cook the chicken slowly, browning it only at the final stages.

Also, don’t baste the chicken until its almost done. Otherwise the angry flames will become a  Burning Bush and engulf your chicken.

As for sauces? There is only one: North Carolina-style barbecue sauce, which you can whip up with a combination of salt, black pepper, red pepper, onion powder, cream of tartar, garlic salt, tabasco, celery salt, chili powder, cider vinegar and water…or you can order a package of Charley Mils Barbeque Sauce Mix, drop 2 tablespoons of that in a quart bottle of  2 parts vinegar and 1 part water and save a ton of time and effort, And it’s really good. You can order it online at  www.AgriSupply.com, an agricultural supply house in Micro, NC.

When it comes to cooking barbeque chicken, patience is an especially good virtue.

I am Jim Brewer, Editor of the new CvilleBuzz, a humble on-line attempt to entertain those, not only … END_OF_DOCUMENT_TOKEN_TO_BE_REPLACED