You are here: Home / Now We're Cooking / High Heat Eye of Round 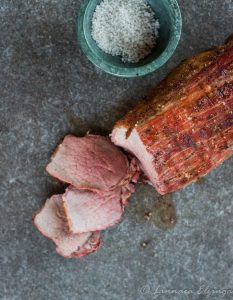 One of the best values in the meat department is an eye of round roast. The eye of round is one of the most flavorful of all cuts of beef, but it – like all round roasts and steaks – is tough.

Often (usually), I go to the grocery store with absolutely nothing in mind. If something looks good – or is at a good price – I buy it. A couple days ago, I saw a 3-pound eye of round roast, and since we haven’t had one in quite a spell, I bought it. On sale!

I think there are two secrets to a delicious and tender eye of round roast. First, cook it at a high temperature, and second, have a professional grade meat slicer handy. More on that later.

Cooking an eye of round at a high temperature takes a little advance planning, but it’s worth it. Begin by taking the roast out of the refrigerator at least an hour before cooking time.

In the meantime, set the oven temperature to 500 degrees. That’s pretty hot, by the way.

I like to season the roast with lots of Kosher salt, coarse black pepper, a flick or two of garlic powder, and a little Montreal Steak Rub for good measure. Some just use salt and pepper, and it’s good that way, too.

Place the roast in a shallow roasting pan with no water and no cover and put it in the hot oven.

In exactly seven minutes, reduce the oven temperature to 475 and roast for an additional 7 minutes per pound. In my case, it was 21 more minutes. Then, turn off the oven, but absolutely do not open the oven and peek in, or the whole deal is down the drain. Rather, get out of the kitchen for 2 ½ hours. Watch a football game or something and then – after 2 ½ hours – take the roast out and let it rest briefly beneath a loose piece of aluminum foil.

Now for the piece de resistance. Get out an electric slicer, mine is a Waring Pro Food Slicer, and slice the roast extremely thin. Some chefs are good enough with a butcher knife or an electric carving knife, but not me. I can’t cut it that thinly by hand, but when I put it in the machine, I can carve it paper thin. Go ahead and carve the whole she-bang while you’re at it, since an eye of round makes about the best roast beef sandwiches you’ll ever eat.

By the way, last week I mentioned a commercial grade Waring Pro that I use to fry oysters. The exact model I have is a Waring Pro DF 280. I highly recommend that and the Food Slicer – both are great pieces of kitchen equipment.

High Heat Eye of Round

1 Eye of round roast, any size

Cook roast for 7 minutes at 500 degrees, then reduce heat to 475 and cook 7 minutes per pound, then turn off oven and do not open the door for 2 ½ hours.

I am Jim Brewer, Editor of the new CvilleBuzz, a humble on-line attempt to entertain those, not only … END_OF_DOCUMENT_TOKEN_TO_BE_REPLACED